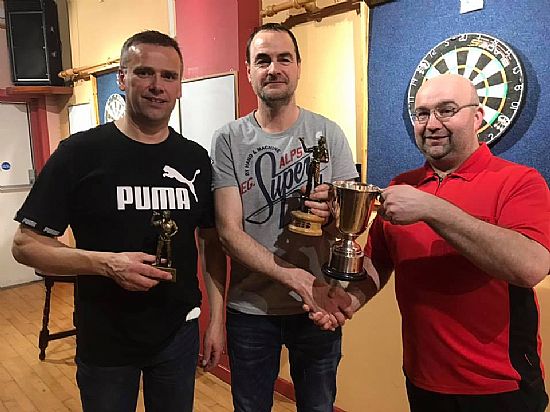 Last week saw the KDDL leagues, kindly sponsored by Williamsons Butchers, and Ranking points competitions draw to their conclusions, and the weekly stats alone speak for the season as a whole.  60 180s, 9 other triple-treble scores and 30 high checkouts would have seemed unthinkable even a few years ago.  Admittedly there were several catch-up games played in addition to those scheduled, but many of the scorecards returned were mighty impressive on the reverse side.

The Legion sealed the 'A' league title last week, and wrapped up proceedings with an impressive win over Wanderers.  Commodores secured the runners up cup, but only just as a whitewash over Quoyburray 'B' kept them above Sanday on game difference, despite going down 7-5 to the islanders in their final game.  Orkney Golf Club sealed 4th place with a comfortable win over Bilco Boys, whilst 5th placed Untouchables narrowly beat 6th place Untouchables 'A'.  Warriors had a surprisingly big win over Nomads, who had the luxury of not needing a result, despite Legion Arrows winning over Quoyburray in the battle of the bottom two.

Exiles had aslo wrapped up the 'B' league last week, but they were in sensationally unforgiving mood as Dennis Watt, Erlend Ritch and Kevin Sarling all hit big in their wins over Sands and second placed Shapinsay.  Unfortunately Shapinsay were denied an end of season darts night, as RBL2 could not raise a team before the deadline, and the committee awarded Shapinsay a 12-0 walkover.  Murray Arms took third place with wins over Muppets and RBL2, who ended up fourth.  Tigers sealed an impressive second half of the season with a decent win over vikings, but only by game difference over Quoyburray and Young Loons.  Sands already knew they were picking up the wooden spoon a few weeks ago, but they ended on a positive note, picking up their second point of the season in a draw with third bottom Sanday 'B'.

The Masonic was the place to be on Friday night, as this seasons Ranking competitions reached their conclusion.  With plenty of players still in the hunt for that elusive top 9 position, not to mention a similar scenarion for 'B' players looking to play in the inaugural 'B' Intercounty match, a big turnout was expected.  Susprisingly this was not the case, with only 33 players entering and not a huge turnout of 'B' players.  What the night lacked in numbers it certainly did not lack in quality and nail biting entertainment.

Ryan Tulloch was in the top 9 before the evening started, but missed doubles against Wayne Monkman cost him his place, as Paul Foubister overtook him on his quarter-final run.  Wayne also reached the quarters and put himself in contention for a wild-card, as did both Brian Moar and Kevin Peace, with Kevin narrowly winning their showdown to make the semi-final.

The Semi-finals pitched Robbie Stanger and Stevie Linklater against each other once more, with Robbie taking the game 4-1.  In the bottom half, Ivan Leslie had steadily gathered momentum over the course of the evening, and he took this into his semi with Kevin Peace, as he won 4-0, although Kevin had a few chances that went a begging.

The final was the icing on the cake of a monumental KDDL season. Robbie and Ivan throw some titanic tungsten and two 180s, a 177 and checkouts of 120, 122 and 151 between them in eight legs had an appreciative audience salivating.  There were numerous occasions where a particular score or finish seemed pivotal, only for the other player to hit back.  In the end however, it was Ivan who hit double 12 and secured his first League Singles title, denying Robbie the chance for three in succession.

The East v West encounter takes place in the Stromness Golf Club on Friday night with a bus organised to take the KDDL players leaving the old bus station at 6.30pm.  Please note there is an absolute zero tolerance policy in place to taking any alcohol onto the bus, opened or otherwise.