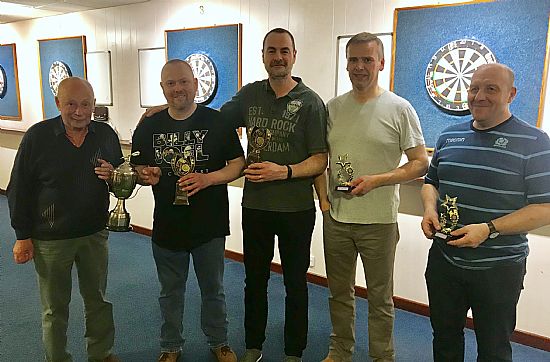 Past long serving committee league treasurer Derek Linklater is pictured presenting KDDL league doubles winners Paul Foubister and Ivan Leslie with the cup. They beat Robbie Stanger and Stevie Linklater 5-4 in the final. Ivan won the high finish prize donated by Ian Linklater with a 152. Over £200 of prize money was shared on the night. Winners £136 runners up £70.

The 2019 KDDL League Doubles was played in the Legion last Friday, and there was an excellent entry of 21 pairs all vying to lift the prestigious trophy.
Last years champions were Robbie Stanger and Stevie Linklater, and they were playing well again from the off, and soon found themselves facing the dangerous pairing of Kevin Gray and Derek Firth.  With the Legion pair just slightly off the boil, it was Robbie and Stevie who triumphed 4-1.
The bottom half of the draw saw Sanday duo Paul Foubister and Ivan Leslie play some stonking darts early on. Both were gunning for the bottle of vodka, kindly donated by Ian Linklater for the highest checkout, and it was a 152 from Ivan which eventually saw him take it at the end of the night.
There was also a 12 dart leg from the pair in their quarter-final against Bruce Moar and Kevin Peace.
The other Legion pairing of Wayne Monkman and Ian Findlay had a tough route to their semi against the Sanday pair and perhaps it had taken its toll, as Paul and Ivan progressed 4-0.
The final was a mouth-watering prospect with by far the best two pairs on the night squaring up.
Paul and Ivan won the bull-up, but with the first four legs played going against the throw, it appeared it may not be as decisive as it sometimes proves.
The first four legs saw some nervy darts emerging amongst some really good stuff, until finally Paul and Ivan made it count to go 3-2 up.
Robbie and Stevie hit right back, before each pair once more won on their own throw to force a deciding leg.
Both pairs had chances at the winning double before Ivan finally checked out on double 15 to recapture the trophy Paul and himself last won in 2010.
The Masonic plays host to the next two competitions with the 'B' league Singles on Friday night, and then the flagship competition of the year, the Tennent's Kirkwall Open a week on Saturday.
180s were hit by: Derek Firth, Wayne Monkman, Stevie Linklater, Keith Brumpton, Martin Peace, Gary Brown, Jamie Marwick, Davy Henderson, Jason Cook, Steven Low, Nicol Gray, Don Wilson, Kevin Sarling, Robbie Stanger, Robbie Norquoy, Billy Ward (two), Stevie Moar (two), Lee MacPherson (two), Darryl Robertson (two), Paul Foubister (three) and Ivan Leslie (four).  Keith Brumpton also scored 177.
Ton plus checkouts were scored by:  Brian Moar 100, Keith Bain 103, Robert Hutchison 105, Kevin Gray 110, Paul Foubister 112, Freddie Tait 117, Jason Cook 117, Michael Muir 120, Toby Penwarden 122, Ian Linklater 137, Ivan Leslie 100, 152 and Stevie Linklater 103, 107.