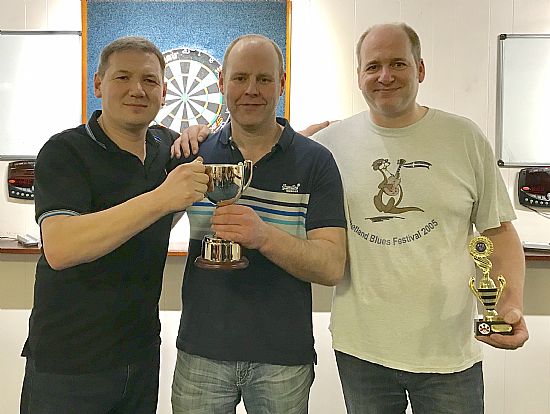 This years ranking points competitions to select the team to play Shetland are beginning to draw to a close with the penultimate competition, The Taylor Singles, being played in the Legion last Friday night.
The ranking points tables are tight, and the standard on show was simply breathtaking all night long, despite the obvious nervous tension in the air.  By quarter-final time many of this years form players were still involved.
Leigh Shearer squeezed by Robbie Stanger, whilst Derek Firth narrowly defeated Ryan Tulloch, with both virtually cementing their place in the team. Bruce Moar added some much needed points to his tally but failed to get the  better of Kevin Gray, whilst Ivan Leslie finally stopped the rampaging Kevin Sarling from the 'B' League.
Leigh secured yet another final berth with a 4-1 win over Derek, despite Derek having a blistering start.  The other semi-final was a slightly more dour affair, but eventually Kevin pipped Ivan, also 4-1.

Kevin and Leigh had between them been involved in 4 of the 5 finals this season, so it was little surprise that they were contesting this one as well.
Leigh played reasonably well in the final, as his 72.4 average suggests but Kevin was in sensational form and got better and better as the match progressed.
Leigh managed to reduce the deficit after three legs to 2-1 but that was as close as he would get. With Kevin averaging over 90 for much of the match (finishing with 87.3) he stepped up a gear after Leigh hit his double, taking the fourth leg in fourteen darts and the fifth in a superb 11 darts, much applauded by the onlooking crowd.
Leigh had chances in the sixth leg but spurned them, only for Kevin to retain the cup with a 110 checkout.

The young talent of Orkney get their chance to shine on Friday in the Legion, as the Under 30's Open singles is played.
The place was rocking last year with the jukebox pumping and some really good darts on show, more of which will be expected this time around.