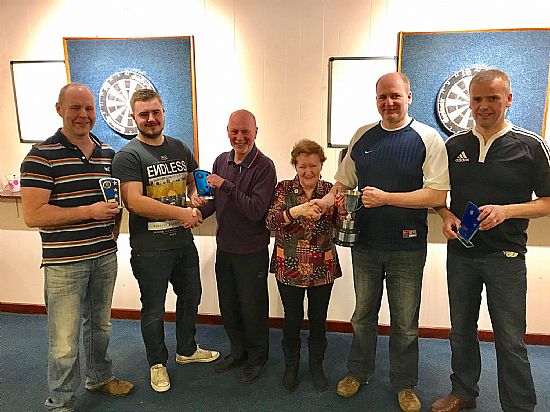 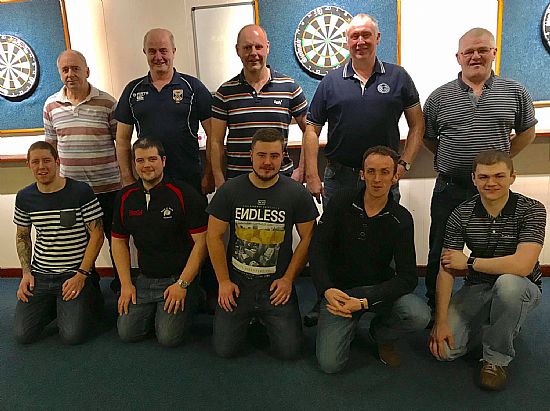 There were five father/son pairings entered in the doubles competition. Good for the future of Orkney darts!

Week 13 of the Kirkwall and District Darts Leagues rolled past and it did indeed prove unlucky for some.  Sanday found themselves tied 5-5 with the Legion, but just couldn't get over the winning line and lost out 7-5.
Near the other end of the table it was the Legion Arrows who narrowly lost out in the last leg to the Bilco Boys, who in doing so have almost guaranteed themselves top flight participation for another season.
Wanderers beat Quoyburray 'B' in bizarre fashion.  Bizarre in that Wanderers Stewart Gray not only won all the matches he played but also hit a maximum!  The Golf Club strolled to a victory over Warriors, whilst the Commodores and Untouchables sides had comfortable wins over Untouchables 'A' and Nomads respectively.
There were quite a few close run matches in the second tier, none more so than Tigers and Young Loons sharing the points.
The Sands boys are beginning to find their feet, only just losing out to the Muppets, as did Sanday 'B' in their defeat to RBL2.
Murray Arms won away to the Vikings to keep their promotion hopes alive and, with leaders Exiles match v Tankerness postponed, Shapinsay kept within touching distance of them by beating Quoyburray 9-3.
Quoyburray skipper Neil Tait lit up the 'B' league with a leg in which he suddenly thought he was MVG as it included both a 180 and a table topping 164 checkout.
Reports are varied about the rest of the darts thrown in that leg, or indeed how many there were, but the highest finish of the season so far is worth praise in itself!
This Friday sees the fifth of seven ranking competitions of the season take place in the Tankerness Hall as the Craigie Cup comes to town.  With the 'B' league inter county competition now confirmed, it would be hoped to see an increased number of 'B' players in attendance as these main ranking points are added on to any 'B' points gained from the 'B' singles and doubles competitions, with the top 12 boys getting a place in the team to go to Shetland.
The following Friday sees the 'B' League doubles take place in the Masonic.
180s this week were hit by:  Stewart Gray, Ross Groundwater, Fraser Laird, Lee MacPherson, Derek Firth, Ian Findlay, Kevin Peace, Leigh Shearer, Trevor Shearer, Brett Dickinson, Gary Wilson, Ryan Wilkie, Stevie Garner, Steven Low, Keith Bain, Gary Drever, Jamie Marwick, Neil Tait, Don Gray, Kevin Gray (two), Stevie Linklater (two), Robbie Stanger (two), Alan Findlay (two) and Brian Stevenson (two). Raymie Rendall also scored 171.
High checkouts were hit by:  Jim Hamilton 100, Stevie Garner 100, Stevie Linklater 101, Jamie Marwick 104,  Aaron Edwardson 106,  Stuart Thomson 110, Trevor Shearer 111, Gary Wilson 113, Derek Firth 116, Brett Dickinson 116, Keith Brumpton 120, Ian Findlay 128, Ian Eunson 138, Brian Stevenson 151, Neil Tait 164 and Andrew Clouston 105, 106.