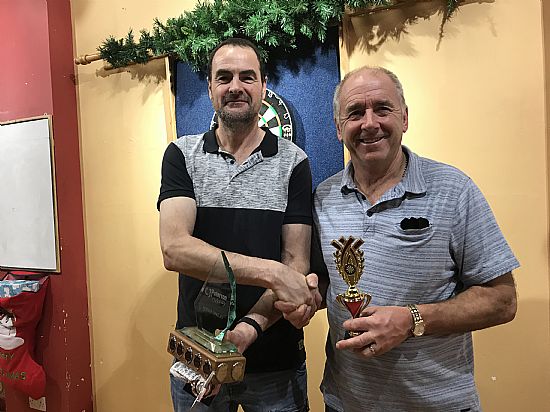 Friday night saw this season's ranking points competitions reach the halfway stage with the Festive Open Singles played in the Masonic.
Annually the biggest of the ranking competitions, this year was no exception with 61 players taking part, ensuring it would be a long night of darts.
Whilst there are certainly no easy draws nowadays, the bottom half of the draw seemed to be stacked with big guns and inevitably some had to give way early on.
Trevor Shearer had been in sparkling form earlier in the week, and he squeezed past Kevin Gray on his way to the quarters, where Ivan Leslie proved too strong for him.  Likewise Gary Wilson picked up another valuable 5 points as he reached the quarters, but could not get the better of Stevie Linklater.
In the top half, all eyes were on Tigers new signing Stevie Garner, who had put in an impressive debut in midweek and he did not disappoint, beating Wayne Monkman and then Nicol Gray, before being pipped by two ton-plus finishes by Brian Moar.
However, Brian's doubling ability completely deserted him in his quarter-final showdown with Alan Gray.
Craig Taylor has been quietly picking up points in ranking competitions this season, but announced his intention to mix it with the top boys by beating Leigh Shearer, before also falling victim to the deadly double-itis against Kevin Peace in the quarters by a 3-2 scoreline.
Into the semi-finals, and it was Kevin Peace who struggled to slot into the doubles, allowing the calm and steady Alan Gray to make it to his first ever ranking final with a 4-1 win.  There was some power scoring on show in the second semi-final, with a few chances which went begging as Ivan beat Stevie Linklater 4-2.
The final saw the two Sanday team-mates lock horns, and it was an entertaining final to watch.
Alan resolutely went about his game, playing his best darts of the night. But Ivan was in sensational scoring form and took any chances that came his way.
Alan went 2-1 up thanks to a 180 then 119 finish to the leg, but then Ivan hit top gear, stealing back with a 14 darter.
Despite Alan having a couple of darts at a double, he was facing an onslaught of 140s and Ivan nearly checked the final leg with a 164 finish, but he made no mistake in tidying up with his next throw.
Ivan left with the trophy, and £100 first prize but Alan left with almost as big a smile and £50 prizemoney, delighted with his achievements and proving that despite the oncoming tide of young talent in the leagues, there is still life in a few old dogs yet!

The annual big festive drinks raffle also took place on the night. Top prize went to Brian Stevenson Snr, with Gray Norquoy 2nd prize winner. There were also various others prizes given out to numerous other winners. Thanks to all who bought and sold tickets in what is a major annual fundraiser for the KDDL. 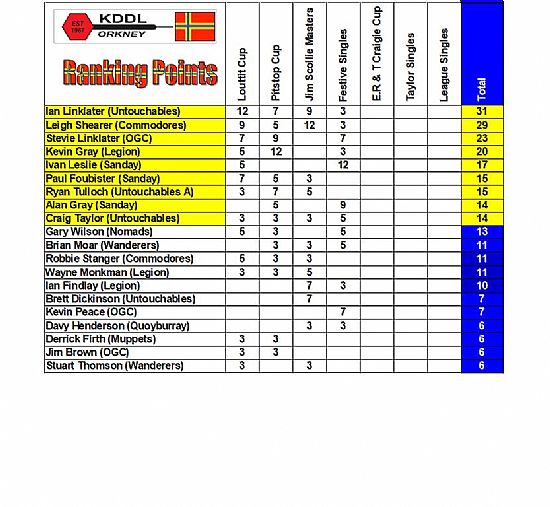 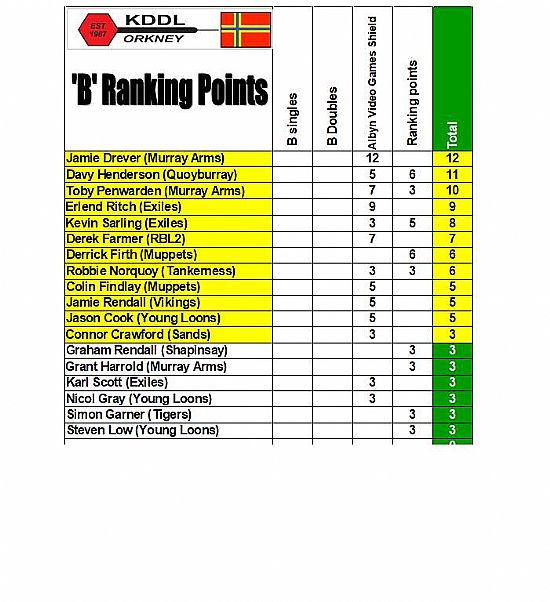