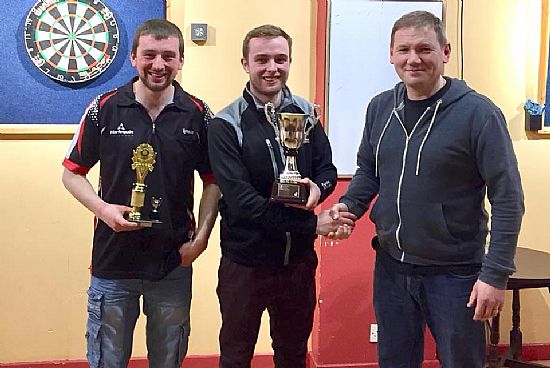 Jamie Drever won the B League Singles in a very close final against Erlend Lennie.
The final went to 3-3 before Jamie took the last 2 legs to take the title he last won in 2013. The competition took place in the Kirkwall Masonic Club on Friday night.

There was little change in the order of the Williamson's Butchers sponsored KDDL 'A' league this week, with 9-3 scores being the order of the day in four of the six matches played.  Winning by this margin were the Commodores, Legion, Orkney Golf Club and Sanday over the Untouchables, Quoyburray 'B', Arrows and Shapinsay respectively.
The Wanderers let slip a 3-0 lead to lose 8-4 to Untouchables 'A', while the Warriors finally returned to winning ways courtesy of a 10-2 win over Quoyburray.

The top of the 'B' league appears to be finally taking shape now.  Top side Nomads defeated close challengers Vikings 8-4, which allowed Tankerness to move four points clear in second with a 10-2 victory over Ale Stars.  Murray Arms kept themselves in contention with a narrow 7-5 win over close rivals Bilco Boys, a result which was replicated for Streamline over Sands as well as Sanday 'B' over Young Loons.

It's the big one on Saturday, the annual  JW Gray & Co Tennent's Kirkwall Open.
Now in its 10th year the biggest cash prizes in Orkney Darts are up for grabs, winner £500, runner up £200, semi's £50, quarters £20, furthest registered KDDL B player £100, furthest lady £100.
There is also the big raffle with a Michael Van Gerwen replica shirt and Target lighting system to be won, and of course the bottle stall. Prize donations very welcome on the day. Names in by 1.30pm in the Kirkwall Masonic.
Check the Orkney Darts Facebook page for further updates.