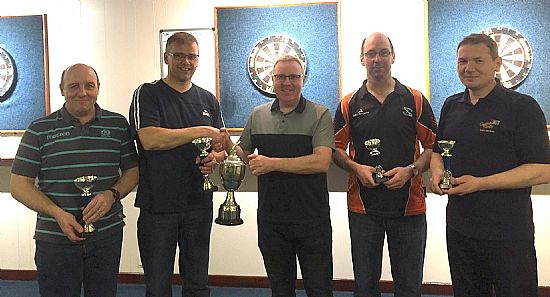 The KDDL league doubles took place in the Kirkwall legion on Friday night when 15 pairs took part, all trying to get their name engraved on the prestigious cup which dates back to the very first season of the league 50 years ago.
At the AGM last August, it was decided to remove the doubles from the ranking points system, replacing it with the Taylor Singles cup, so that all ranking contests were singles events.
Although the number of entries was down, the standard in many of the games was high.
In the semi-finals Ian Linklater and Craig Taylor dispatched Brian and Stevie Moar 4-1, meanwhile Stevie Linklater and Robbie Stanger took out Gary Wilson and Erlend Lennie 4-2.
The final started off a close affair, with Ian and Craig moving into a 2-1 lead, before Stevie and Robbie stepped up a gear to take the title 5-2.
The final saw a 180 each for Stevie and Craig, a 111 finish by Robbie, and two 15 dart and one 14 dart leg by the winners. In total in the competition there were 6 180’s scored on the night and five ton plus finishes.

On to league business, and the KDDL season rolled into its final quarter last week when there was no change at the top or bottom of the table as the Legion whitewashed Quoyburray.
The Orkney Golf Club retained their slim hopes of catching the Legion and have given themselves a great chance of finishing runners up after two wins, 8-4 over Shapinsay and 9-3 over untouchables 'A'.
The Commodores moved clear of the rest in third by beating Warriors 7-5, but it was very close by all accounts.
Elsewhere the Wanderers got revenge on the Untouchables for their first half defeat, and ran out 8-4 winners this time.
Quoyburray 'B' produced the shock result of the week, defeating Sanday 7-5 with Ross Groundwater hitting a hat-trick of maximums. A very welcome three points for the QBB boys who now find themselves four points clear of relegation for the time being.
Only three games were played in the 'B' league but two of them had a great effect on the promotion chase.
The Bilco Boys overpowered league leaders Nomads 9-3 and despite sitting fourth, if Bilco win their game in hand over the rest they will jump to the top spot.
Also very much still in the hunt are the Vikings, but they had to come from 4-2 down against the Sands to eventually win 7-5.
The final game of the week pitched the Young Loons against Streamline, and it was the Streamline boys who delivered the victory with an 8-4 win.
This Friday sees the final 'B' ranking points tournament, the 'B' league singles, take place in the Masonic. This will as always be a hotly contested tournament, with quite a few potential winners within the pool of players.
This will not determine the final 'B' team for the East v West game however as there are still points available from the main League Singles at the end of March.
The following Saturday, March 10, the 10th Tennent's JW Gray Kirkwall Open Singles takes place, with the biggest prizemoney in Orkney Darts up for grabs.
Organised by the KDDL it is open to all, male and female, over 18,  and thanks to our sponsors in conjunction with the league, well over £1000 will be given to winners on the day. The competition takes place in the Kirkwall Masonic, with names by 1.30pm. No late entries accepted.