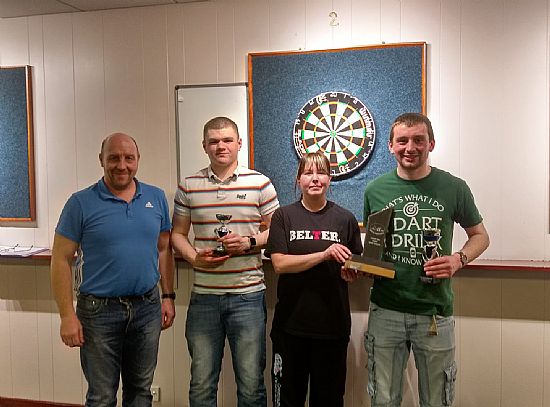 Pictured from left are Stevie Linklater with runner-up Alan Findlay, while Kelly Harcus presents winner Erlend Lennie with his trophies.

Friday evening saw the future stars of Orkney darts toe the oche in the Kirkwall Legion, all keen to lift the prestigious under 30's open singles trophy, now in its sixth year.
35 entered and there was a good spread from the KDDL, WMDA and one or two unregistered players all hoping to showcase their talent.
With the tunes pumping out of the jukebox, it was apparent from the start what a great atmosphere there was and the older generation could take note of how eager boys were to step in and mark, and also to follow the competition to its fruition.
Perhaps the intrigue and anticipation of there being so many potential winners helped to fuel the interest of those who were knocked out early on.
The excellent standard and number of very close matches would also have helped. There were cash prizes for those reaching the quarters, as well as a bottle put up by Stevie Linklater, whose idea the competition was initially, for the highest checkout – which Gary Wilson gleefully picked up with a 144 finish.
Alan Findlay, who very recently turned 18, was a potential candidate from the off and was in good form as he made his way to the final, beating Ben Johnston 4-1 in an entertaining semi-final. Ben himself had played well on his journey, beating the much fancied Gary Wilson in the quarters.
The bottom half of the draw threw together some of the main contenders and some terrific matches ensued.
Defending champion Erlend Lennie played Jamie Marwick early on and, with Jamie missing a few match darts, Erlend then proceeded to take the scalp of Mark Shearer in the next round, followed by Nicol Gray in the quarters.
Elsewhere Jamie Drever managed to get the better of young Ryan Wilkie, before losing out in the quarters to his old doubles partner Ryan Tulloch.
The semi-final between Erlend and Ryan was a tremendous match, possibly the game of the night, with both powering in the scores until a nervy last leg saw Erlend finally progress to the final.
Despite being a decent game, the final was understandably nervous, with 25 year old Erlend using his experience to go 2-0 up.
However, Alan wasn't for bowing out without hitting back and after pinching the third leg he hit a terrific 132 finish to draw level. Erlend himself hit back, finding his scoring power once more and took the next two legs to go 4-2 up.
As the finishing line drew near, Erlend's composure started to slip a little, allowing Alan to get the seventh leg.
However, Erlend showed why he is in the running for a place in the senior squad to play Shetland by holding steady and eventually hitting the double to win the trophy.
Prize money given out on the night was: £75 Erlend Lennie, £30 Alan Findlay, £10 Ryan Tulloch & Ben Johnston, £5 Nicol Gray, Gary Wilson, Jamie Drever & Sean Stanger.
180's hit in the competition: Mark Shearer, Gavin Linklater, Sean Stanger, Jamie Drever and Gary Wilson.
High checkouts hit in the competition: Gary Wilson 144, Ryan Tulloch 108, Jamie Drever 110, Ben Johnston 111, Erlend Lennie 126 and Alan Findlay 108 &132.

League
Week 15 of the Williamson's Butchers KDDL 'A' passed and the Legion's race to retain the league title gathers apace as they swept aside last years runners up, the Commodores.  The Untouchables had a close shave against the Arrows but managed to get the win, and in doing so drew level with Untouchables 'A', whose match against the Golf Club was postponed.
Sanday were in an unforgiving mood against Quoyburray, pummelling them 11-1 and the week would only get worse for the east mainland boys.
Wanderers once more got the better of the Warriors, leaving the Warriors stuck on the 11 point mark.  Joining them on 11 points are Quoyburray 'B', who drew with Shapinsay.  Shapinsay played a catch up game against Quoyburray and beat them 8-4 which leaves Quoyburray 9 points adrift from safety and almost guaranteed for the drop.
However Shapinsay draw level on 10 points with the Arrows, and with only 1 point separating Shapinsay, Arrows, Quoyburray 'B' and Warriors, it should prove to be an eventful end to the season in the bottom half of the 'A' league.
The main shock of the predictably unpredictable 'B' league this week was that there were absolutely no positional changes whatsoever, completely unheard of this season!
Erlend Lennie continued his sensational form and was the difference as leaders Nomads beat Murray Arms 7-5.
Similar scores were recorded for Vikings over Young Loons and Tankerness over Sanday 'B', which opens up a slight gap at the top now for Nomads and Tankerness.
The Bilco Boys defeated Sands 10-2, as did the Muppets over the Ale Stars.
180s this week were hit by: Kevin Gray, Leigh Shearer, Craig Taylor, Jim Hamilton, Ben Hogan, Jamie Marwick, Hamish Baillie, Brian Stevenson, Ally Linklater, Neil Drever, Craig Moar, Brian Murray, Gordon Rendall (Sanday 'B'), Matthew Wylie, Gary Wilson and Erlend Lennie (two).
Ton-plus checkouts came from:  Ben Hogan 100, Freddie Tait 107, Neil Drever 110, Robbie Norquoy 110, Ross Groundwater 112, Kevin Gray 114, Craig Taylor 115, Ivan Leslie 115, Derek Firth 132, Allan Brown 132, Jamie Drever 136, Erlend Lennie 105 & 109 and Stevie Moar 120 & 126.