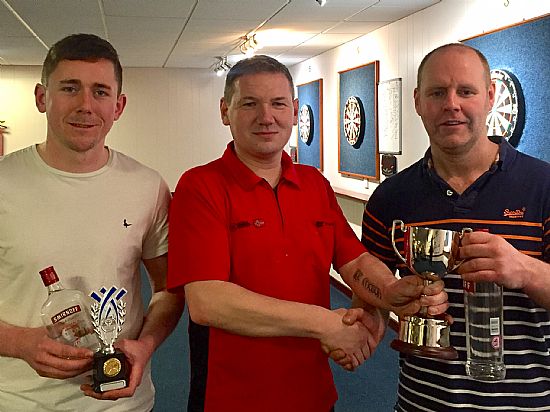 The latest KDDL ranking points competition took place in the Legion on Friday night, when the inaugural Taylor Singles competition took place.
The competition replaces in the league doubles in the raking system, with the cup donated by long serving league president Craig Taylor.
With this being the second last ranking competition, players were all keen to get their share of the points for East v West and qualification to make the team to play against Shetland in April.
With 39 entries, the major talking point was the high standard of darts played throughout the night.
In the semi-finals Jamie Marwick faced Ryan Tulloch, with Ryan winning through 4-2. In the other semi, Kevin Gray took out Billy Ward 4-1.
The high standard final saw some excellent darts by both players. Kevin ran out 5-0 winner, with an overall average of 85.4, with his darts per leg throw 26, 11, 15, 20, and 16. Ryan had 73.24 and he was on a double 3 of the 5 legs.
In the five legs Kevin hit 2 x 180s, 5 x 140+, 6 x 100+ and a 116 check out.
Ryan hit 3 x 140+ and 4 x 100+.
This was the third ranking points competition win in a row for Kevin, a fantastic achievement, and took him straight to the top of the ranking points leaderboard on 50 points.
With just the league singles to go as a ranking points fixture for A & B players, the battle for those final places will again go right to the wire.
But, lets not forget the league doubles. Although not a ranking points event, it is still a highly prestigious title to win.

On to league business. Another week passed in the KDDL season and the theme of this week was close matches with plenty of high standard darts.
In their quest to catch the Legion, both the Golf Club and Commodores were made to sweat as they narrowly overcame Sanday and the Untouchables respectively, both finishing 7-5.  Ben Hogan in particular was in inspired form for the Untouchables, hitting a maximum score and two big checkouts.
Unfortunately the points gained failed to close the gap as the Legion managed to recover from the Wanderers drawing level at 4-4, to eventually squeeze out an 8-4 win, but it was much closer than the final score suggested.
The Quoyburray derby was another close affair but the ‘B’ boys managed to pull out an 8-4 win which leaves the Quoyburray side well adrift at the foot of the table.
It also moves the Quoyburray ‘B’ team four points clear of Shapinsay in second bottom, who lost out 8-4 to the untouchables ‘A’.
The Arrows and Warriors played yet another action packed game and Graham Firth only just missed three darts to seal the win for the Arrows, with the Warriors managing to nick a draw at the death.
A valuable point for both teams but they will still need to look over their shoulders for a few weeks yet to be safe from the drop.
The ‘B’ league wouldn’t feel right this year without more mayhem at the top, and so it proved once again this week.
Murray Arms started the week as leaders, but could only manage a draw with the Muppets and ended up third.
Although a good point for the Muppets, it probably leaves them too far behind now to realistically push for promotion, but they will no doubt have more to say in who does go up.  The Nomads moved top with the narrowest of wins over Sands, while Tankerness slipped into second with a similar win over streamline, in a game which looked like a top flight match on the back of the card.
Robbie Norquoy moved top of the ‘B’ league high finishes with an impressive 161 checkout in the game.
Another good game was seen in the rugby club, where the Ale Stars finally went down 9-3 to Sanday ‘B’.
180s this week were hit by: Bruce Moar, Ian Linklater, Brett Dickinson, Ryan Tulloch, Ian Findlay, Davy Henderson, Hamish Baillie, Colin Kirkpatrick, Robbie Stanger, Billy Ward, Ivan Leslie, Roy Foubister, Graham Firth, Raymie Rendall, Stevie Moar, Brian Moar, Neil Croy, Keith Brumpton, Ben Hogan, Craig Taylor, Jim Hamilton, Clive Hewison, Robbie Norquoy, Erlend Eunson, Ali Flett, Michael Vendy, Keith Bain (two), Erlend Lennie (two), Derek Firth (three), Jamie Marwick (four) and Kevin Gray (four).  Roy Foubister and Ryan Tulloch both also scored 177.
Ton-plus checkouts came from:  Leigh Shearer 100, Derek Firth 100, Gary Brown 100, Colin Kirkpatrick 102, Keith Bain 104, Roy Foubister 107, Stuart Thomson 109, Patty Sinclair 110, Derek Ward 112, Gary Wilson 116, Kevin Gray 116, Ian Linklater 117, Jim Brown 117, Robbie Stanger 125, Stephen Griffiths 130, Jamie Marwick 140, Simon Parry 156, Robbie Norquoy 161 and Ben Hogan 115 & 155.