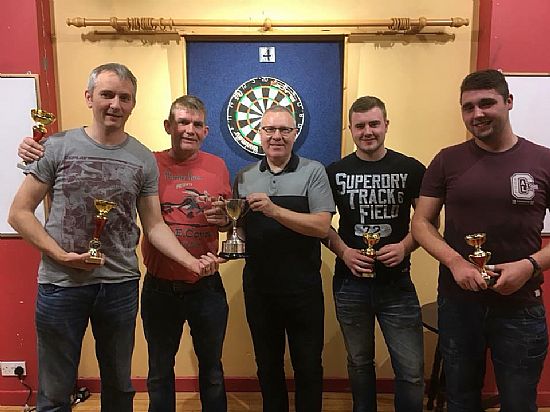 Still no change at the top of the Williamsons Butchers A League this week.  The Untouchables had a good 9-3 win at home to Sanday, with Ivan Leslie posting a 12 dart leg for the Isles men, but the Legion maintained their six point advantage with a win by the same scoreline over the Warriors, who they failed to beat at two attempts last season.  The Golf Club remain third after a comprehensive 10-2 win over bottom placed Quoyburray, while Untouchables ‘A’ pounded Quoyburray ‘B’ 11-1.  The Legion Arrows drew for the third week in succession, once more taking points off some of the big hitters, with the Commodores having to share the points this week.  The Shapinsay v Wanderers game was postponed.

Down in the B league, the Muppets obviously thought the top of the table wasn’t exciting enough, so they duly drew with leaders Nomads just to bring everyone else in the top 6 back into contention.  Meanwhile Tankerness scraped a 7-5 win over Young Loons to leap from fourth into second, just two points shy of the Nomads.  The Young Loons had some better fortune later in the week as they duked it out with the other young team, the Ale stars, with the Loons coming away the victors by 9 games to 3.  The Ale stars had fared better against Sands earlier in the week but lost out 5-7.  The Vikings kept themselves within touching distance of the promotion places, winning all 8 singles in a 9-3 win over Streamline. Two points further back are the Bilco Boys in sixth who had a pretty comfortable looking 10-2 win over Sanday ‘B’.

This Friday sees the fourth ranking competition of the season, the Festive Singles, which is an open competition.  Only KDDL registered players receive ranking points, and there will be plenty looking to pick some up with both the main and ‘B’ ranking tables being pretty close at present.