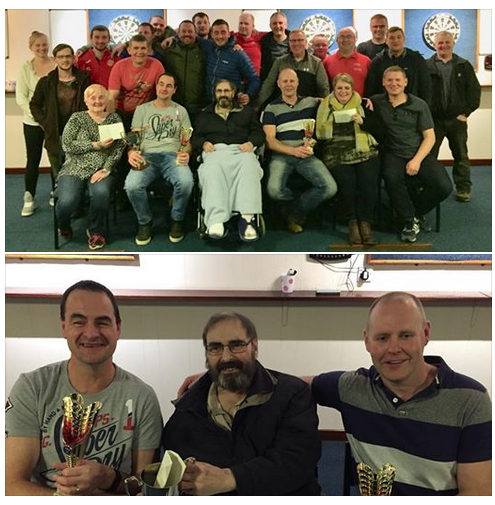 The latest KDDL ranking points competition took place in the Kirkwall Legion on Friday night, with 39 players taking part in the Jim Scollie Masters, the competition named in honour of the man who has served the league for over 50 years.

Before the competition took place, the players who gathered gave  Jim Scollie a big round of applause, delighted that he was able to attend after a long period in hospital.

There was a very high standard of darts played throughout the night by numerous players all keen to gain those all important ranking points.

By semi—final stage it was Brian Moar v Kevin Gray, with 13 and 14 dart legs by Kevin sealing the match 4-1 to take him into the final of the competition he won last year.

In the other semi, it was Ivan Leslie taking on Leigh Shearer, with on form Ivan taking the match 4-0, making the final line up the same as last year.

The final was a very close affair, the score was even a number of times at 2-2, 3-3, 4-4. Kevin had a shot at bull with his last dart of his throw, but just missed, leaving himself on 25, before Ivan took the last leg, checking out 52, to win the title and the 12 ranking points.

As winner Ivan picked up prize money of £100 kindly donated by Jim, with Kevin receiving £50.

There were 12 180's, on the night, with Kevin Gray scoring 4 of them. There were 10 ton plus finishes, the top two being a great 147 by Leigh Shearer, and a 140 by Brett Dickinson. There were also at least 6 finishes on the bull.

Everyone was delighted to see Jim and his family at the competition, with all present wishing him well.