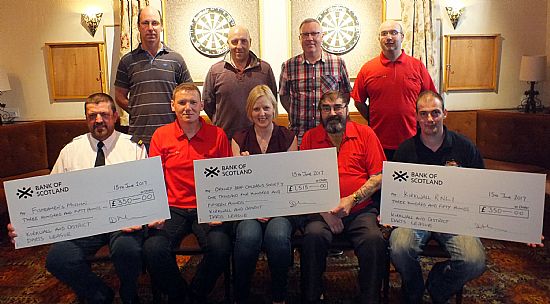 Three good causes have been given donations totalling well over £2000 by the Kirkwall & District Darts League, with money raised over the past season.

The Fishermen's Mission in Orkney and Kirkwall RNLI are annually supported from the KDDL with money raised at the Davie Cooper Memorial Darts, with Roy Norquoy from the Mission and Marcus Vile of Kirkwall Lifeboat being presented with cheques for £350 each.

The league also supports another local charity each year. This year the recently formed Orkney Deaf Childrens Society's Pat Robinson was presented with a cheque for £1515 raised at the Steven Flett Memorial Darts, the May weekend Charity Doubles Darts in the Masonic, where Charlie Tulloch, Carole Celli and helpers also run a bottle stall, and the Mintlaw team always come up and support, and the Tattie Bogle Charity Darts, the last fixture of the season.

Many thanks to all players and supporters for supporting these good causes throughout the darts season.