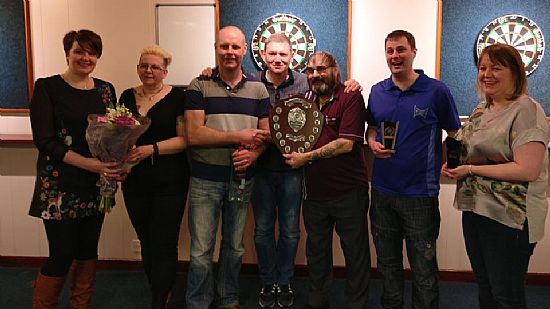 There was a great turnout for the first of three charity darts events.
The Steven Flett Memorial Shield attracted 21 pairs to the Legion on Friday night. It’s a great fun event as it attracts players who don’t play all the time although they were a bit thin on the ground.
From the start it was obvious that the holders Kevin and Shona Gray had no intention of giving up their crown as they stormed into the semi-final. Going strong in the top half were Gary Wilson and Katy Croy as they made the final.
The final was as one-sided as the score suggests. It’s title number six for the Gray’s — can anyone stop them? Kevin scored five 180s over the five legs played.

It’s onto the big one on Friday at the Masonic with the game against Shetland. The Orkney boys will be going for seven-in-a-row and Shetland will be all out to stop them. It’s in the Masonic at 7pm.

Saturday sees the Anniversary Shields being played for in the Legion with a 1.30pm start. It’s an open singles event and there’s gents and ladies shields to play for.

The ladies will be playing Lerwick Ladies Thursday night in the Legion.
Next charity event is next Friday, April 28, in the Masonic with a separate ladies and gents competition. Mintlaw, from Aberdeenshire, will be up for their annual game.