Silverware and £500 for Ivan Leslie as he wins, for the second time, the JW Gray & Co Tennent's Kirkwall Open Darts Singles, organised by the KDDL. 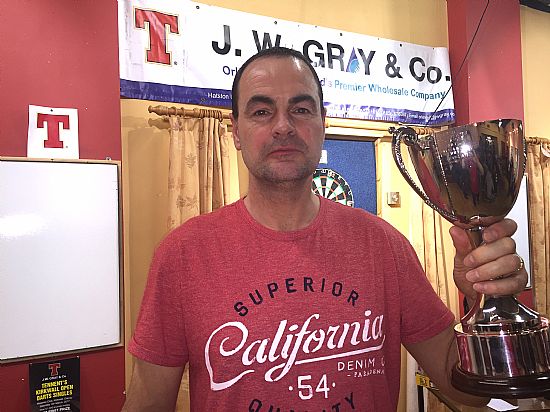 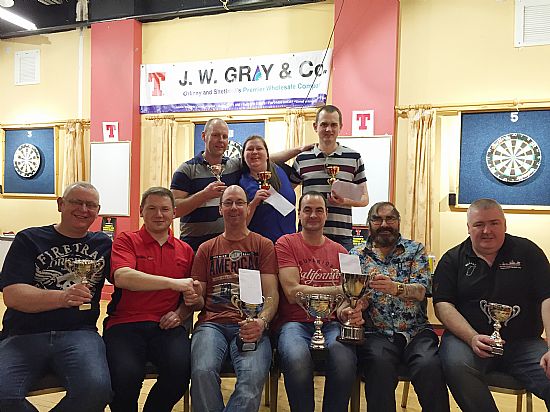 The Tennent's JW Gray Kirkwall Open just gets better and better as 107 people put their names down for the ninth open tournament.
Twenty-one ladies entered, with Shona Gray and Nicky Laird making the last 32, but the star lady was Kelly Harcus, who beat two male players to make the last 16 and scoop the top lady prize of £100.
Kelly’s run was ended by the star player from the Borders, Peter Craig, one of five players who travelled for the tournament. There were also players from Western Isles and Shetland.
Defending champion Kevin Gray lost out in the quarter finals to Ivan Leslie, who was joined in the last four by Peter Craig, Roger Irvine from Shetland, and Orkney’s Ian Linklater.
Ivan’s 4-0 victory over Roger and Ian’s 4-1 win against Peter ensured that it would be two KDDL players who would compete in the showpiece, with the cup guaranteed to remain in Kirkwall, as it has done for the eight years previous.
The final itself, wouldn’t have looked out of place on television. The score of 5-2 to Ivan looks one-sided, but it was far from it — Ivan just seemed to have the first dart at a double and he wasn’t missing anything.
Ivan picked up the £500 first prize courtesy of the sponsors, with Ian winning £200 as runner up.
Peter Craig from the Borders took the top checkout prize with a 161. The top ‘B’ player and £100 winner was Jamie Marwick, who beat Derek Ward jnr in a play-off.
In total well over £1000 was won on the day by players reaching various stages of the competition.

The next big competition is this Friday with the second last ranking points event, the league doubles. It’s in the Masonic and is for registered players only, names in by 7.30pm.
In the Williamsons ‘A’ League, the Legion looks odds on to retain the title after beating the Sands ‘2’ 8-4 and now only need five points from their next four games. Only the OGC and the Commodores can stop them.

The Williamsons ‘B’ League title is still very much up for grabs as the top teams take turns to drop points. Quoyburray dropped two points in a 6-6 draw with the Muppets, however fellow title-chasers Tankerness crashed to a 9-3 defeat to Shapinsay. Shapinsay still have t play Quoyburray in what could potentially be a league decider.