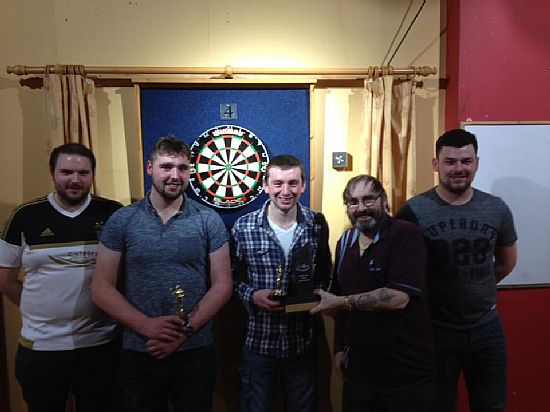 A pretty poor turnout of only 23 players entered for the Under 30’s Open Singles. Last year the entry was 35 and this year no lady entries. Of course some of last year’s players could now be too old; maybe it’s time to raise the age limit?
Anyway, there was splendid darts played and none more than Erlend Lennie as he stormed into the final taking out the holder Michael Moodie and Brett Dickinson on the way and playing in his first season in the KDDL, Steven Low also made the final. It was as one sided as the score of 5 - 0 suggested as Steven never got going, while Erlend was finishing everything he left.
The high checkout prize went to Matthew Wylie with a 107. It’s on to this Friday with a big day for the ‘B’ singles and the last ‘B’ ranking point’s event. It’s in the Masonic, names in by 7.30pm.

What’s going on in the Williamsons ‘A’ League?
Last week the league leaders the Legion dropped points allowing their challengers to close the gap but this week a surprise loss for the Commodores 7-5 to Untouchables ‘A’ allowed the Legion to increase their lead to seven points as they beat the Golf Club 9-3.
That defeat puts the Golf boys 11 points of the top and I think out of the as far as the title is concerned.
Sanday got back on the winning trail beating Sands 2 9-3. The Untouchables ‘A’ also had a second good win 8-4 over Quoyburray ‘B’ in a postponed game, and the other Untouchbales did well to beat the Warriors 7-5 but they are too far of the top to have any chance, but that’s not to say they could still effect the top by beating the top teams they still have to play.
It is hard to know what to think of the Wanderers as they take points of the top teams then crash to the team second bottom, the Legion Arrows, the score 9-3.

It is very close in the Williamsons ‘B’ League with five teams in with a shout of the title at present. Quoyburray and Tankerness share top spot after good wins.
Quoyburray beat the Motorhoose 8-4 and Tankerness took out the Muppets also 8-4.
Top score went to Shapinsay 11-1 over St Ola ‘B’ - still no points for them.
The Vikings kept in contention with an 8-4 win over the Bilco Boys and the Nomads stopped the Murray Arms in their tracks with an 8-4 win out in the Hope.
The St Ola ‘B’ boys lost out 8-4 to the Muppets in a postponed game.

It’s only two weeks until the big one, the JW Gray & Co Tennent's Kirkwall Open, which carries prize money of £1,080 plus a big raffle.
There are also special prizes for top lady and top ‘B’ player registered with the KDDL – date Saturday, March 4 in the Masonic.
But before that, this week is the first ever Mixed Doubles competition for registered KDDL and L-KDDL players.
It takes place in the Masonic on Saturday, names by 7.30pm. The winners will go on to face the west league mixed doubles winners.