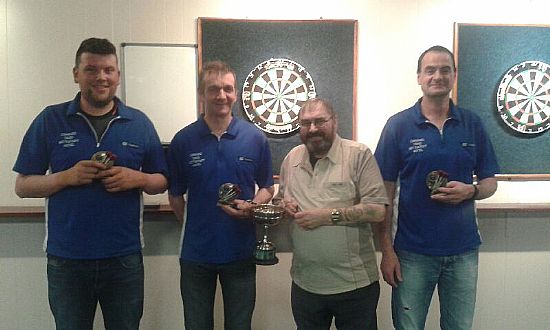 A low turnout of only five 'A' league teams came forward for the Allied Hotels Cup. The 'B' cup a fortnight ago had 15 teams.
However, this did not stop some great darts being played with lots of the game going to the play-off game including the final and the deciding game fell to the Sanday boys as they beat the Legion 3-2 to pick-up their second cup of the season.

Both the Kirkwall darts leagues are hotting up even after just two games.
The Legion are in charge of the Williamsons 'A' league after a second 9-3 win, this time over Sanday who are a lot of players favourite for the title.
Level on points are Quoyburray 'B', who also won their second game 8-4 over the Sands 2 and the Golf Club got their season underway beating the Wanderers 10-2.
It wasn't a good week for the Wanderers as they went down 8-4 to Sanday in a postponed game from the first week.
The first draw of the season saw the Untouchables 'A' share the points after holding the Warriors to a 6-6 result. The game between the Legion Arrows and Commodores was postponed.

Last season's wooden spoon team in the Williamsons 'B' league, the Vikings top the league after another big win 10-2 over the young boys of St Ola 'B' but I am sure they will improve, after all it's the first time they have played competitive darts.
A first win for Shapinsay beating the Muppets 7-5, and also a first win for the Murray Arms, 8-4 against the Bilco Boys. No score from St Ola v Quoyburray game.
The other game saw Tankerness being held to a six all draw by the Motorhoose.

Next cup the Louttit Singles which is the first of the ranking points games on Friday, October 7 in the Legion.