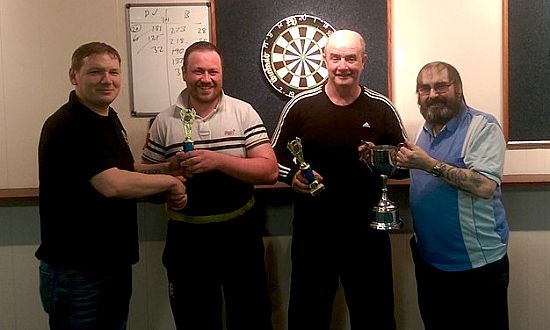 Following a hectic spell of ranking points competitions played over the winter months there was a change of pace for KDDL players on Friday night when the Tom Notman Memorial Cup took place in the Kirkwall Legion.
The cup was presented by the family of Tom in the late 1990's following his death. He was a highly respected founding member of the league committee, serving as both president for ten years and also served as secretary.
The competition is played in the old league format of 301 double start. Although there was a low number of just 14 entering, on a weekend with other darting events being held, it was still an enjoyable night of darts.
Defending champion Brian Moar showed that he had no intention of giving up the crown as he beat Robbie Stanger with two eight dart legs, which included a 180, as it's a 301 double start event. However, Brian could not keep it up, as he went out to the new singles champion Derek Firth, in the semi-final.
Waiting for Derek in the final was Ben Hogan, who played well to earn his place, however Derek proved too hot, and he won 2-0, so that's two trophies for Derek in a week.
There were two other 180's, one each from Ben Hogan and Brett Dickinson. Ben also had a 109 checkout.
On Friday another 301 cup competition takes place, this time open for B teams only. Teams with 4-6 players can enter, on the night it's four singles and two doubles, best of three legs. It's in the Masonic, names by the usual 7.30pm.
On to league business. Following this weeks round of league fixtures the Legion remain five points clear in the Williamson's A League following an excellent 11-1 victory over out of sorts Untouchables A, who have now uncharacteristically shipped 23 games in the last two matches.  Commodores remain second on game difference following an 11-1 humbling of the Sands '2' and Sanday matched that result against the Nomads.
Recently qualified young county players Gary Wilson and Michael Moodie had a tungsten duel and the Sanday supremo emphatically won 3-0, hitting a 180 in each leg to wrap up an excellent week of darts for him.
The Untouchables played host to Orkney Golf Club and they felt hard done by coming away from the tie with no points from a 7-5 defeat.
KDDL Orkney captain Craig Taylor took on local legend Stevie Linklater and showed his KDDL players how its done by posting a 13 dart leg, but unfortunately for him Stevie still won their match up.
Meanwhile in the Legion short legs were aplenty in the Wanderers 9-3 win over RBLM.  Brian Moar smugly wrapped up a 14 dart leg, only for teammate Stuart Thomson to trump him by achieving the same feat twice.
The Legion Arrows returned to winning ways by beating St.Ola 8-4, ensuring their A league status for next season in the process.
With the Warriors having a bye week in the B league Quoyburray B had the chance to return to the top of the pile and did so by securing a 9-3 win over the Masonic.
Meanwhile Shapinsay extended their winning streak to four games with an excellent 8-4 win over the Quoyburray, which in turn sealed Quoyburray B's promotion back to the A league at the first time of asking.
The Bilco Boys' John Thomson had the Muppets number, hitting two finishes of 118 against the Muppets, leapfrogging them into third bottom in the process.
The Muppets then drew 6 apiece against Tankerness later in the week in a match which contained a 15 dart leg from Erlend Eunson, and also a 15 dart leg finished by a 149 checkout to secure the draw from Mark Shearer.
180s this week were hit by:  Craig Taylor, Kevin Peace, Stuart Thomson, Graham Firth, Cammy Scott, Roy Foubister, Billy Ward, Brian Moar, Brett Dickinson, Ross Groundwater, Ian Eunson, Davie Henderson, Erland Eunson, Ben Hogan (2), Stevie Linklater (2), Alan Gray (2), Kevin Gray (2) and Michael Moodie (3).
Ton-plus checkouts came from:  Ivan Leslie 100, Andrew Moar 100, Brian Stevenson 109, Andrew Rendall 111, Michael Muir Snr 113, Robbie Stanger 118, James Flett 122, Davie Henderson 123, Colin Leslie 132, Colin Kirkpatrick 142, Mark Shearer 149, John Thomson 118 & 118 and Des Gillespie 157 & 107.