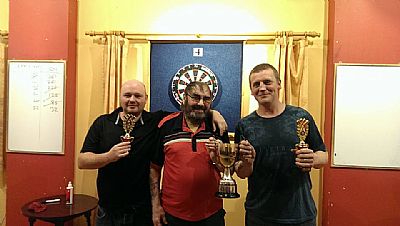 A pretty poor turnout for the last ‘B’ ranking points event as the ‘B’ singles only attracted 22 players, most of the top contenders were present and there were some very good darts played by final time. Eddie Drever faced Steven Walls and was as the score suggests, it was very one sided as Steven just didn’t turn up and as far as his throwing was concerned and Eddie ran out and easy 4 nil winner and on that form he would have given most ‘A’ players a scare.

It’s all change once again in the Williamsons ‘A’ League as the Legion moves up to top spot with a 9-3 defeat of St Ola and they took over on games difference from the Commodore who were held to a 6 all draw with the Golf Club that allowed Sanday to take over third place with a 10-2 defeat of RBLM who find themselves deep in relegation country as the Sands 2 had a terrific 7-5 win over the strong Untouchables ‘A’ which drops them down a place after the Wanderers drew 6-6 with the Untouchables. Still no luck for the Nomads as they lost once again, this time to the Legion Arrows by 7-5.

There’s also a change at the top of the Williamsons ‘B’ League as Quoyburray ‘B’ inflicted the first defeat on the Warriors 8-4 was the score, there level on points but Quoyburray ‘B’ are three games better off. Both Tankerness and Masonic lost ground as they drew 6-6 and are now with games running out well of the top two. At the other end, still no joy for the Vikings as they went down 9-3 to the Muppets. Shapinsay went down 8-4 to Quoyburray ‘B’ in a rearranged game. No result in from last week’s game versus the Bilco Boys.

Next big event is the league doubles on Friday, February 26th. It’s the second last ranking event and it’s in the Legion, names in by 7.30pm. Then the following Saturday it’s the big one, the JW Gray Tennent's Kirkwall Open in the Masonic, names in by 1.30pm.