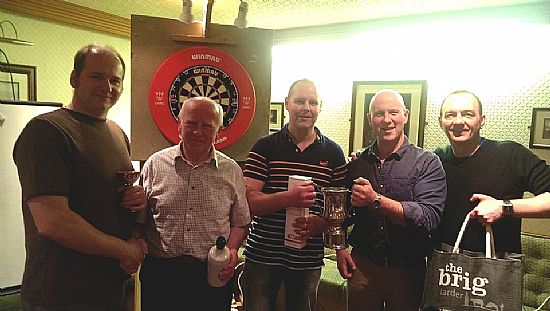 Kevin Gray won the Craigie Cup out in the Quoyburray, beating Leigh Shearer 4-2 in the final. Ross Groundwater won the sponsors prize for the highest checkout by a B league player. Also pictured are sponsors Eddie and Thorfinn Craigie.

It’s all change at the top of the Williamsons ‘A’ League as the Legion dropped two points as Sanday held them to a 6 all draw.

It dropped them to second spot as the Commodore moved two points clear after an 8-4 win over the Nomads who have still not had a win this season.

With Sanday dropping the two points, the Golf Club moved into third spot on games difference after beating the St Ola 9-3.

Good wins for both Untouchable teams, the A team beat the Wanderers 7-5 and the other Untouchables beat RBLM 10-2.

The Sands 2 moved up level with the Legion Arrows after beating them 7-5 and there’s a fair tussle going on to stop that drop into the ‘B’ league.

Not a very big turnout for the E R & T Craigie singles but considering the weather, 29 maybe wasn’t too bad.

None of the 8 ‘B’ League players made it into the points and it was two very familiar faces that made the final with Kevin Gray coming out with a 4-2 win over Leigh Shearer.

180's that night from Stuart Thomson, Ian Linklater and two from Ryan Tulloch, Michael Moodie and Leigh Shearer. Kevin Gray also had one in the final.