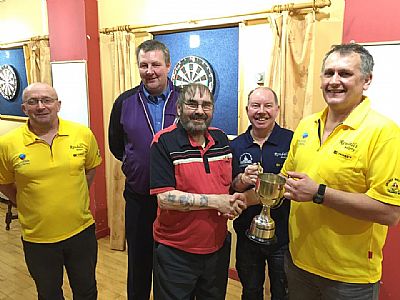 Not a huge turnout for the first of the New Year’s cups. Only 10 teams out of 21 came forward for the Swanney Cup, 9 ‘A’ League teams but sadly only 1 of the 9 ‘B’ league teams. They were Warriors and they played well to take the strong Sanday team to the play off game.

The semi-final featured the top 4 teams in the ‘A’ league with the Legion playing the Commodores and Sanday taking on the Golf Club, the defending cup holders.

There were wins for the Legion and Golf Club with the Golf boys retaining the cup with a 3-1 win over the Legion.

The only 180 scored in the cup game came from James Flett.

This Friday there’s a new trophy for the ‘B’ boys to play for.  It’s in the Legion, names by 7.30pm and it carries ranking points. It’s a singles competition, registered players only.

This Monday sees the start of the ‘A’ league and it couldn’t be closer at the top as the Legion and Commodores are level on points after the Legion lost the last game of 2015, only their second defeat in 6 years so it’s all to play for with Sanday and the Golf Club breathing down their necks, and will there be a first win for the Nomads? Only time will tell.

Next Friday it’s the E R & T Craigie Singles in Quoyburray and it’s a ranking competition. Names by 7.30pm.

The ‘B’ League starts on Monday February 1.