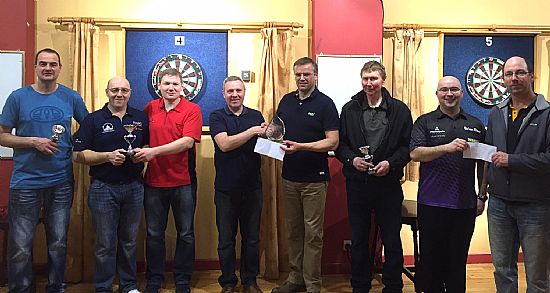 The annual Festive Open Singles took place in the Kirkwall Masonic club last Friday night, attracting an entry of 57 players, of which 8 were visitors to the KDDL.

As well as carrying a top prize of £100, plus several other cash prizes, there were also ranking points up for grabs for KDDL players, looking to gain points to claim a place in the team to take on Shetland in April.

Of these visitors only Trevor Rendall from Westray, John Munson and Mal Reid made it past the first round, with Trevor notching up a 102 finish before losing out to Kenny Gillespie in the second round.

John came up against Robbie Stanger in the second round but progressed no further. Mal played some cracking darts, including finishing off ex-Merkister teammate Brian Moar in a close match with a 14 dart final leg seeing him into the last 16 where his run would finish.

As always, there were some interesting ties thrown into the mix.  Defending champion Simon Parry came in from Westray but couldn't get the better of Brett Dickinson in the first round, losing out 3-0.  Gary Wilson and Davy Henderson locked horns in the second round with both on the cusp of securing a place on the plane to Shetland. Gary eventually came out on top 3-2 to become the only player this season to earn points in every competition so far but Davy had chances to nick it in a close and nervy finish to the match.

Kevin Gray had his mind set on winning a third ranking title in a row, but Legion colleague Neil Croy decided it was time Kevin went home without any points and duly sent him packing.

Into the last 16 and two in-form Legion Arrows players were drawn together. A close game was expected between Graham Firth and Kenny Gillespie and so it transpired, with every leg going against the throw and Kenny progressing 3-2.

Mal Reid came up against Ian Linklater and his previous 14 dart leg was eclipsed by Ian's 12 darter (including the nights highest checkout of 141) as Ian won through.

The quarter finals began with an all Commodores tie between Billy Ward and Leigh Shearer.  Leigh hit a 180 but it wasn't enough to stop Billy winning 3-1.

Kenny Gillespie played tremendous darts to find himself 2 up on Robbie Stanger even though Robbie had hit a 180.  Despite a commanding third leg lead, the vital final double proved elusive for Kenny and Robbie pulled out a 110 finish before taking the final two legs to progress into the semis. Ivan Leslie proved too strong for Neil Croy and beat him 3-1.  A Linklater brothers battle took place on board 7, with Stevie beating Ian 3-1 despite Ian claiming the first leg.

The semis also began with an all Commodores tie but this time Billy could do little to prevent Robbie winning 3-0. The second semi was a closer affair between Ivan and Stevie, with a 3-1 scoreline including a 119 checkout seeing Stevie book his place in the final.

The final was a tight affair and certainly not short in quality. Robbie took the first leg in 17 darts before Stevie equalised with a 16 darter, including a 180. The tie swung back in Robbie's favour as he held throw to go 2-1 up but again Stevie hit back to draw level.  Missed doubles from Stevie allowed Robbie in to take the fifth and clinical finishing again saw Robbie take the title 4-2.  Robbie averaged 79.35 to Stevie's 81.41.

The evening also saw the biggest KDDL fundraiser of the year taking place with the festive raffle being drawn.

The first main prize was won by A. Miller, 2nd prize G. Drever, with 10 other prizes also won on the night. Winners have been notified and the committee are arranging that all winners get their prizes.

A big thank you all all team members for selling tickets, and thanks also go to everyone who supported the league by buying them.

Time for a festive break now with no darts to be played until the New Year with cup games due to be played before the second half of the league gets underway. More details on that to follow before play commences.