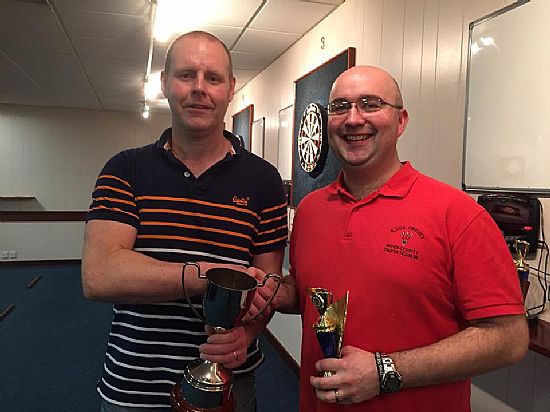 The third ranking points competition of the season took place on Friday night when the Jim Scollie Masters was held in the Kirkwall Legion.

38 players entered the competition, all eager to climb the table and gain points to qualify for the team to play against Shetland in April.

Jim himself has been unwell and could not make it on the night, with everyone at the league wishing him well for a speedy recovery.

On to the darts, and the league laptop software which randomised the draw threw up some interesting ties involving both A and B league players.

By the quarter final stage there were familiar names in the mix.

Kevin Gray threw TV quality darts, including two 180's to give him a 100.2 average to beat Ivan Leslie in a impressive high scoring match.

Meanwhile on form B - league player Davie Henderson had his run put to a stop by seasoned campaigner Robbie Stanger.

Brian Moar progressed to the semi-finals by beating team-mate Simon Parry, while Ian Findlay beat Gary Wilson in a close match 3-2, with a 99 checkout consisting of 19 followed by two double tops to take the match.

In the semi-finals Kevin then beat Robbie, while Brian progressed with a 3-2 win over Ian, helped on by a 180 in the match.

The final turned out to be a fairly one sided affair with Kevin continuing to play quality darts to run out the winner 4-0, to claim back to back ranking point competition wins.

On to league business, the penultimate week of the first half of the season saw some tremendous darts being thrown in some very close games.

The Legion boys cling on to top spot courtesy of a hard fought 10-2 win over the Untouchables.  In second place remain the Commodores who were fought tooth and nail by the Legion Arrows.

The Arrow's Graham Firth shone against the vastly more experienced players of Robbie Stanger and Leigh Shearer, notably claiming both scalps in his singles matches.  Kenny Gillespie also had a terrific win as he overcame Billy Ward.

In the game of the night, the battle for third place saw Sanday overpower the Orkney Golf Club to record a 7-5 win with the back of the scorecard almost completely filled up.  Highlights of the match were Ivan Leslie hitting three 180's while Stevie Linklater posted a brace and also a ton-plus finish.

Elsewhere the Sands 2 may consider themselves a little unlucky to have walked away from playing the Wanderers with no points as they narrowly lost 7-5 despite putting in a very determined performance.

Another team rueing a missed opportunity to gain points are third bottom RBLM who threw away a 4-2 half-time lead against Untouchables A and eventually lost 7-5.

Meanwhile a tense game took place between the bottom two sides the Nomads and St Ola.  At half time it was all square but the Ola took all three points with Brian Stevenson just edging Gary Wilson in the last leg of the night to make the score 7-5 in the Ola's favour.  The Nomads are now three points adrift of the Ola on just a solitary point but they are more than capable of staging a comeback after the festive break.

That result also ensured that RBLM and Sands '2' have both been sucked right back into the relegation dogfight, ensuring an exciting second half to the season could be happening at both ends of the A league table.

In the B league an old-fashioned six-pointer took place between the Masonic and league leaders the Warriors.  Had the Masonic won, the Warriors lead would have been reduced to just one point and all of the top 5 teams could have started the second half of the season with a realistic chance of winning the league.

As it turned out, the Warriors proved just a little too mighty for the 'madmen' and narrowly won 7-5 to put seven points between them and the Masonic in third place.  Quoyburray B finish the half in second spot, three behind the Warriors but four clear of the Masonic following a 10-2 victory away to the Bilco Boys.

Quoyburray move up to fourth following a 9-3 win over bottom placed Vikings.  The match between Muppets and Shapinsay was postponed for a week.

The league big prize draw takes place on the night of the festive singles, Friday 11 December.  Players should get their raffle tickets to league treasurer Davie Henderson as soon as possible.