23 November 2015
Derek and Andrew are B Doubles champions 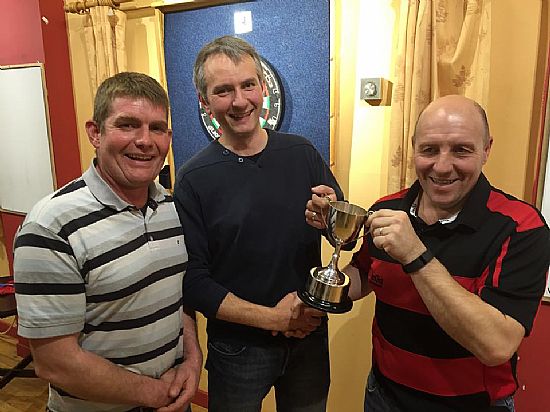 A total of 13 pairs entered the KDDL B League Doubles competition which took place in the Masonic on Friday night.

Although a  rather disappointing entry given the number of players in the league, and slightly down on last year, that did not take away from the quality of darts on the night.

With several strong pairings in what is a very competitive league, it was difficult to predict who would come though the competition and emerge as winners.

By semi-final time it was Des Gillespie and Colin 'Paddy' Kirkpatrick who beat Neil Tait and Erlend Eunson to book their place in the final.

Meanwhile in the other semi Malcolm Coghill and Scott Wilson were beaten by Andrew Moar and Derek Manson.

The final was evenly played out and at 3-3 it was a question of who would hold their nerve and hit the winning double to get their name on the cup.

Andrew and Derek, who last year lost in the semi-finals of the competition went one better this time when they pipped Des and Paddy 4-3 in the very close final.

With two weeks of the first half of the season to go, things are still tight at the top of the A league.

The Legion demolished bottom placed Nomads 11-1 to retake top spot from the Commodores on game difference, but the Legion also still have a game in hand.

The Commodores themselves deservedly ran out 8-4 winners over the Wanderers in a very entertaining match.

The Orkney Golf Club found the going tough away to the Sands 2, but despite drawing 3-3 at half time, the OGC boys proved too determined in the second half and took the win 8-4.  A special mention goes to Ryan Tulloch who has been in fine form this season and he notably took the prestigious scalp of Stevie Linklater in the first half, although Stevie got revenge in the second.

8-4 seemed to be the score to post in the league this week as both Sanday and Untouchables A posted similar wins over Untouchables and St Ola respectively.

In the bottom half of the table the Legion Arrows and RBLM shared the points in a tight match, a result which benefits both sides by pulling them slightly further away from the Ola and Nomads who currently occupy the relegation spots.

Although no B league games were scheduled for this week, in order to allow the players to prepare for this Friday nights B league doubles competition, two matches that had been postponed from previous weeks were played out.

The top placed Warriors side maintained their unbeaten run so far this season and defeated Quoyburray 8-4 to extend their lead at the top.

Despite missing their captain Malcolm Coghill, the Masonic team visited the Muppets and came away with a 9-3 victory. The three points gained lifted the Masonic above Tankerness and into third spot, leaving them only 4 points behind the Warriors but more crucially only a single point behind Quoyburray B in the second promotion spot.