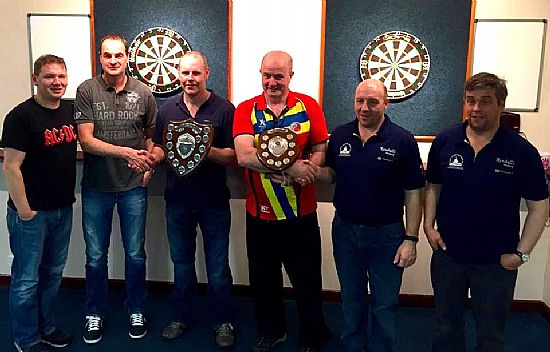 24 players entered the Cricket Singles and Doubles competitions which were held in the Kirkwall Legion on Friday night.

Cricket – in which one player goes for scores over 40, while his opponent tries to hit as many bulls and 25's to prevent his opposite number from getting a high number of 'runs'– is a game which can quickly swing back and forward as the night progresses, and is very different from your regular leg scoring game.

In the singles familiar names came through to the semi-finals, with Ivan Leslie beating beating Derek Firth 2-1, while on the other board Kevin Gray overcame Stevie Linklater 2-0 to book his place in the final.

In the final it was Kevin who triumphed over Ivan 3-2 in a close match to retain the trophy for the third year in a row.

In the doubles competition it was Kevin along with partner Derek Firth who booked their place in the final with a semi-final 2-0 win against Robbie Stanger and Leigh Shearer.

In the other semi Stevie Linklater and Jim Brown overcame Craig Taylor and Iain Wilkie in a close match which ended 2-1.

The final and the trophy was won 3-1 by the hard to beat partnership of Kevin and Derek.

So, it was the case of doing the double for Kevin when it came to winning the silverware. He played great darts throughout the night, and in one shot during the competition hit the maximum of three bulls with three darts.

The Legion went into the week sitting top and they continued their 100% record by beating Untouchables A 8-4.

However, it is the Commodores who end the week perched on top, albeit only by having won more legs by virtue of having played a game extra. They recorded a 9-3 victory over Sands 2 on Monday, before defeating Sanday 10-2 on Wednesday.

Sanday had preceded this defeat by beating bottom of the table Nomads 9-3 earlier in the week, a result which saw them draw level on points with the Untouchables, who went down 9-3 to the Orkney Golf Club courtesy of a second half whitewash, and were leapfrogged into 3rd place in the league in the process. Stevie Linklater and Jim Brown hit a 12 dart leg while playing in the doubles.

Another second half whitewash was witnessed in the battle of last seasons promoted teams with the Legion Arrows coming out 8-4 victors over St.Ola despite being 4-2 down at half time. Three very welcome points for Cammy Scott's men who appear to have hit the ground running in the A league.

The Ola are sitting rather precariously in second bottom with a solitary point, but there are still a lot of games to go yet in which to catch up. RBLM sit third bottom following a 9-3 defeat to mid table Wanderers in a game high in quality, which resulted in a pretty full back of the card.

However, RBLM did finish the week more positively by picking up a useful point in a 6-6 draw against Sands 2 with Ray Butcher managing to win the last game to tie the match.

The A league table as it sits presently is as tight as it has been for many years, with only 3 points separating the top 5 sides.  Additionally, the B league is looking almost as close with a measly 6 points separating 1st from 7th.

A measure of how competitive it is between the B league teams can be seen in the number of draws and narrow victories this year.  Of the 30 matches played to date, 9 have resulted in draws and a further 8 in 7-5 wins.

Sam Caithness was followed by Garry Peace as they won the last two games for the Masonic to narrowly defeat Shapinsay 7-5. Quoyburray B had a more emphatic win, defeating the Muppets 9-3 and go joint top on points with the Warriors who don't seem to have played their game against the Quoyburray this week.

Meanwhile Tankerness came from 6-3 down to draw 6-6 with the Bilco Boys and currently sit in third spot, although they are the only team so far to have completed all fixtures for this half.

Twenty Seven 180s were hit this week between the leagues and the cricket singles and doubles cups played on Friday night.

Ton-plus checkouts came from: Neil Croy 100, Kevin Gray 100, Scott Walls 110, Neil Drever 112 & 107, Robbie Stanger 114, Craig Taylor 126, Brian Moar 155 and Brett Dickinson with a maximum checkout of 170 in his side's match against Sanday! Terrific darts from the young Nomad and this will undoubtedly be a huge confidence booster for him. The challenge for the rest now is to see if anyone can match Brett and share the high checkout shield with him at the end of this season.

Now that we have reached the mid-point of November, league treasurer Davy Henderson is now looking for raffle tickets to start coming back in. He will be present at the B league doubles and the Jim Scollie Masters over the next two Friday nights, or they can be handed in to him at the Bank of Scotland.

On behalf of the KDDL we wish Jim “Tattie Bogle” Scollie a full and speedy recovery from his recent ill health and hope we will see him at the darts again soon.

It cannot be overstated how much work he does behind the scenes to keep on top of the day-to-day running of the organisation. In the meantime the committee will endeavour to keep things ticking over as normal.