12 November 2015
Another title for Kevin 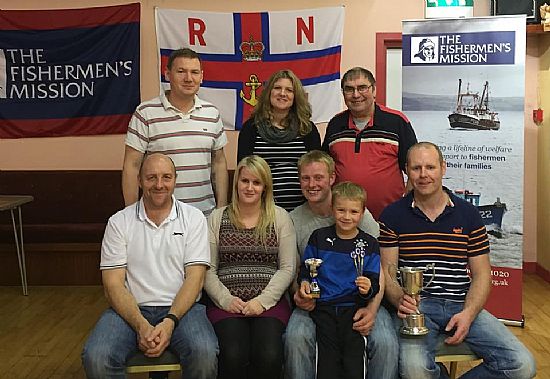 A very good entry of 43 players toed the oche for the Davy Cooper Memorial Charity Singles which included six young ladies. Among them was Shetland's top player Iris Anderson who did very well by reaching the quarter finals and only just losing out to Stuart Thomson.

The defending champion, Kevin Gray played well to reach the final. Also making it was Stevie Linklater. It was a final everyone was hoping for but it never got off the ground as both players struggled to find any sort of form but it was still interesting and at 2 - 2 it could have gone anyway but it was Kevin who held his nerve to win 3 - 2.

Robbie Stanger had hit a 180 and had an 11 dart leg and he still lost.

Both the charities, the RNLI and Fishermen's Mission will get £300 each so a big thanks to all the players who donated to the big raffle.

It's still very tight at the top of the Williamson's A League as all the contenders had good wins. The Legion beat the Arrow's 10 - 2 to remain in top spot but still level with them are the Untouchables who defeated the Sands 2 also 10 - 2 and that seemed to be a popular score as the Commodores also won 10 - 2. On the receiving end was RBLM. The Golf Club are also close to the top with a 8 - 4 defeat of the Nomads. Sanday had a narrow 7 - 5 win over the Untouchables A.

In the Williamson's B League, Tankerness are up to second spot after a big 11 - 1 win over The Vikings, the only team in the B League still to win a game.

The Warriors who had a no game week still lead the League by four points and have a game in hand. Quoyburray just don't seem able to win as Shapinsay held them to their thirddraw of the season and a very good 7 - 5 win for the Muppets over the Bilco Boys. No score from The Masonic v Quoyburray B game.

This Friday it's the Cricket Singles and Doubles. It's in the Legion Club. Any registered player of the KDDL can play. Names by 7.30pm