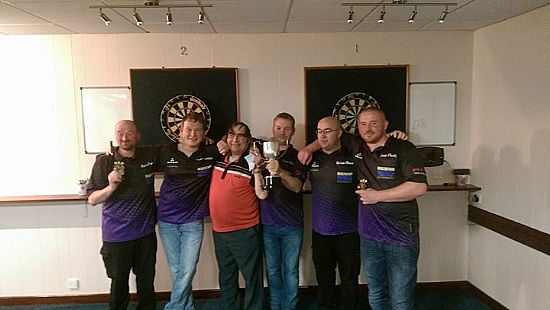 Both the Williamson's Darts Leagues got off to a bright start, no real surprises as the Legion in defence of their 'A' League title beat the strong Sanday team 9-3 but that wasn't the top score as the Commodores whitewashed the Nomads 12-0, closely followed by the Golf Club who beat the St Ola 10-2.

The Untouchables started strongly with a 9-3 defeat of RBLM. The other Untouchables 'A' drew with the Wanderers 6-6 and a 8-4 win for the Sands 2 over the Legion Arrows.

In the Williamson's 'B' League, mixed fortunes for the two relegated Quoyburray teams with a 9-3 win for the 'B' team over Shapinsay and a 7-5 defeat for Quoyburray by Tankerness. The two new teams also had mixed fortunes with the Warriors getting a point in a six all draw with the Muppets, but a 8-4 defeat at the hands of the Masonic for the Vikings.

A very poor turnout of only four teams from the 'A' league entered for the Lynnfiled Cup so a round robin was played with the top two playing for the cup and the bottom two playing in the Plate Final. It was a repeat of last weeks' cup as the Golf Club took on the Wanderers and the Wanderers came out on top 3-2. The Sands 2 also picked up their second Plate Victory 3-1 over the Nomads.

It's a big day this Saturday as the teams from Caithness arrive for the Annual  Inter League Games in the Masonic Club at 1.30pm. There's a couple of changes in the 'B' Team, with Robbie Norquoy and Colin Ross coming in that means two new reserves in, Mark Shearer and Thorfinn Eunson.

All reserves for both teams are requested to attend. Next Friday October 9, it's the Louttit Singles. The first of the Ranking Points Event, it's in the Legion at 7.30pm and is for registered players only.