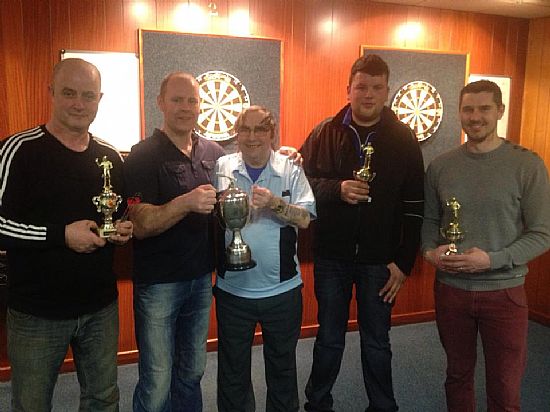 A big crowd of 58 players, making up 29 pairs in all, turned up for the second last ranking points event, the league doubles.

No real surprises in the first round, but heads did roll from the second round onwards, and by quarter-final time, some big names were not there, but the defending champions Derek and Kevin were, and they were up against the strong pairing of Stevie Linklater and Jim Brown from the Golf Club.

One ‘B’ League pairing, Malcolm Coghill and Scott Wilson, also made it but they were beaten by Paddy and Des Gillespie, who also went out, to Wayne Monkman and Michael Moodie.

In the semi-final, Derek and Kevin made it into the final with a win over Ian Wilkie and Mike Bain.

The final was pretty one-sided as clever finishing by both players gave Derek and Kevin their fifth double title on the trot. The score was 4 nil.

So it’s on to the last ranking event — the League Singles — on Friday, February 27, in the Masonic at 7.30pm and with the points very close a big turn out is expected.

There’s no change at the top of the Williamsons ‘A’ League, with all three contenders winning well, led by the Legion, who ended Sanday’s hopes with a 10-2 win over the isles boys.

The Golf Club kept level on points with a 9-3 defeat of the Nomads and they have a game in hand.

The Commodores are only a point behind after beating RBLM 10-2 and it wasn’t a good week for RBLM as they also went down 9-3 to the Wanderers, who also played twice and beat Quoyburray ‘B’ 10-2.

The other Quoyburray team didn’t fair any better, losing out 8-4 to Untouchables ‘A’ but a good 8-4 win for the other Untouchables team, over Sands ‘2’.

A big upset in the Williamsons ‘B’ League as Tankerness took the first points of the season off the St Ola team, holding them to a six all draw. That allowed the Legion Arrows to move to within four points after their 9-3 defeat of the Motorhoose. The Shore are also in with a shout after beating the Masonic 10-2 and Shapinsay, at last, found some form in beating the Bilco Boys 10-2 and the Muppets pulled off a great result, with a 8-4 defeat of the Murray Arms.