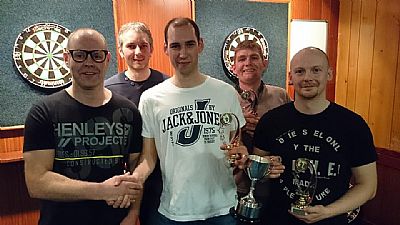 The ‘B’ League Doubles attracted 17 pairs – an entry which is just about average for the competition.

By the semi-finals, four different teams were represented, and it was the Bilco Boys pair who lined up against a pair from the Legion Arrows.

Derek Manson and Andrew Moar found Kenny Gillespie and Graham Firth too hot to handle and lost out 4-1.

The next big event, and the last for the first half of the season, is the Festive Singles in the Masonic on Friday, December 12.

It’s a ranking points event, but it’s open to any male player in Orkney.

There’s no change in the Williamsons ‘A’ League, as the Commodores easily beat the Wanderers 10-2.

However, better still was the Legion, who whitewashed the Nomads 12-0.

The Untouchables are staying in the hunt after a good 9-3 win over Quoyburray ‘B’, and the other Untouchables beat RBLM 7-5.

There were no ‘B’ League games played, owing to the ‘B’ Doubles taking place.

Last week, Kevin Gray only scored two and not four as published.