09 September 2014
Gray's do the double in Shapinsay 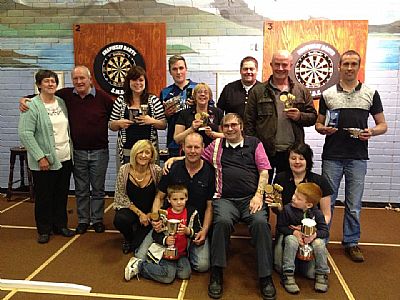 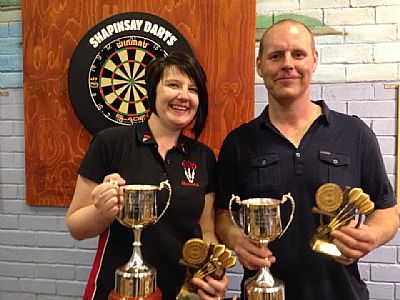 It was another smashing day of darts at the second Shapinsay Open, as 32 gents and 17 young ladies made it to the island on Saturday.
And a very big thank-you and well done should go to Shapinsay Darts Club for putting on a show worthy of the highest praise.
Also, well done to the players who made it out to the island. Both entries were up on last year and both champions were defending their titles — Derek Firth for the gents and Shona Gray for the ladies.
So, with prizes for various events, competition was hot — very hot — and, as in all events, big names bit the dust early on.
But the champions didn’t, as they both made the finals, and waiting for them was team-mate Kevin Gray and Linda Harcus.
The ladies’ final was as good as the two ladies fought tooth and nail, with Shona taking a 2-0 lead, only for Linda to take the next three, but then lose the next two to go down 4-3.
So, in a great match, Shona retained her title.
Could Derek do the same?
Well, not quite, as Kevin raced into a 3-0 lead. Derek stopped the rot by taking game four, but that was hit lot, as Kevin took the next to win to win 4-1 — making it a husband-and-wife success.
Alan Gray took the top finish prize with 115, and Malcolm Coghill won the play-off to take the ‘B’ prize, while Ian Eunson was the top local player. Top lady, with a 108 finish, was Yvonne Stanger.
Well, that’s the season open, and it continues on Monday, with the Spiers Cup for ‘A’ and ‘B’ teams of four to six players, to be held in the Masonic Club.
Team entry fees and now due also, and there will be a committee meeting on Wednesday, September 14, in the Masonic, at 8p,.
Tattie Bogle