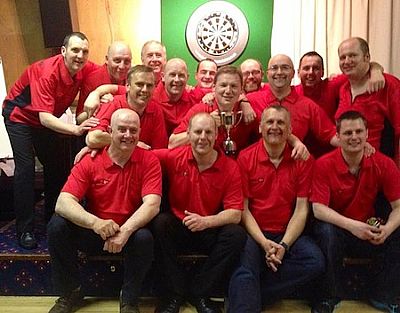 It was four-in-a row for victorious Orkney darts players who celebrated a convincing record 11-4 win over their Shetland rivals in the Lerwick Legion on Friday night.
The KDDL Orkney side continued their winning streak on the big stage in Shetland with a solid performance which saw the team claim their fourth win in a row for the first time in the 42 year history of the fixture for the team in red.
There was a fantastic atmosphere in venue during the game, with the flashing lights and blaring walk on music adding to the buzz of excitement around the match.
As a warm up to the main event, the respective teams two reserves play a doubles match, and it was the visitors who claimed the first victory of the night, with the clearly delighted KDDL’s Leigh Shearer and Gary Wilson beating Nigel Llewellyn and Marc Henry 2-1.
On to the main event, and the Orkney players were determined to stamp their authority on the fixture right from the start, and they did just that.
The match consists of six doubles and 12 singles, with fours also played out if required, and as always, it is a race to get to the 11 point finish line. Shetland, being the home side, chose to play the doubles first.
First up were Brian Moar and Robbie Stanger against the Shetland veterans Paul Scarsbrook, who scored a 180, and Tommy Watt, with Brian and Robbie running out 2-0 winners, getting the visitors off to a great start.
Next up were Kevin Gray and Derek Firth who also put on a solid performance to win 2-0 against Stuart Paul and Gordon Irvine.
Stevie Linklater and Bruce Moar quickly took care of Neil Redfearn and Andrew Swannie by the same scoreline, and the team were 3-0 up, much to the delighted of the visiting side and their supporters.
The Orkney players were on a roll, with Shetland determined to turn things around, and they got their first point on the board when Gareth McRitchie and Kevin Llewellyn took out Michael Bain and Iain Wilkie 2-1.
Kirkwall’s Ivan Leslie and Neil Croy bounced right back in the next match with a 2 straight victory over Tommy Williamson and James Sinclair.
The last doubles match saw Alan Gray and Roy Foubister go down 2-1 against Roger Irvine and Barry Couper who also hit a 180.
The doubles now over, the scoreline was 4-2 to the visitors.
The reds were determined to keep the momentum going into the singles and they did, quickly winning the first two games 2-0, with Stevie Linklater overcoming Gareth McRitchie and Kevin Gray beating Roger Irvine.
The Orkney contingent were on their feet between all games - with the team, as well as the ladies team who played the night before - also in the crowd, giving the players fantastic support on the stage.
The third singles match saw Shetland's Neil Redfearn getting a narrow 2-1 win over Bruce Moar, with Neil scoring a maximum along the way.
Paul Scarsbrook, who hit a 115 finish, beat Robbie Stanger 2-0, clawing the match scoreline back to 6-4.
Little did anyone know at the time, this was to be the last point Shetland would get on the scoreboard, as the KDDL Orkney team powered to a famous victory.
Man of the match Ivan Leslie played TV quality darts in a blistering performance to beat Kevin Llewellyn 2-0, a match which impressed all in the crowd, no matter who they came to support, and included a 180 from Ivan as well as other steady 100 plus scores.
Keeping the momentum going was Derek Firth, beating Barry Couper 2-0, Brian Moar overcoming Tommy Watt 2-0, and Michael Bain, a 2-1 winner over Stuart Paul.
In a twist of fate, with the game poised at 10 -4, up next for the Orkney side was Iain Wilkie - the man who hit double 7 to win the title on the same stage 2 years earlier -  a match which saw the visitors win in Shetland for the first time in 22 years.
This year time Iain faced Shetland captain Andrew Swannie.
With the score at one leg each in their game, Iain found himself on double 5 for another famous victory, he kept his cool and slotted it in, taking the game score to 11 - 4 and sparking celebrations for the Orkney players, all delighted to be part of the four-in-a -row squad!
Speaking after the game, captain Craig Taylor, who is also president of the KDDL, said that he was delighted with the performance of the players on the night, and indeed throughout the season.
He said: “Everyone who took to the stage played their part in this win. We have a great team spirit and players who can throw tremendous darts, and that showed on the night.
“When we spoke before the game it was said that we were perhaps going in to the game as favourites following our previous three wins, but it was important that we took nothing for granted, and everyone should be focussed on their own game when they were on stage. The players did just that and showed what we can do.”
On behalf of the team he thanked all involved in the Shetland Darts Association for organising the events over the weekend and for the hospitality extended to them during their stay.
He also thanked team sponsor ER & T Craigie Butchers for providing the team shirts from KT Sports, as well as Loganair for accommodating the team with their travel arrangements.
• The the Anniversary Shield competition, which was held the following day, over 80 players took part in the men and ladies competitions, which were won by Whalsay players Philip Mowat and Iris Anderson.