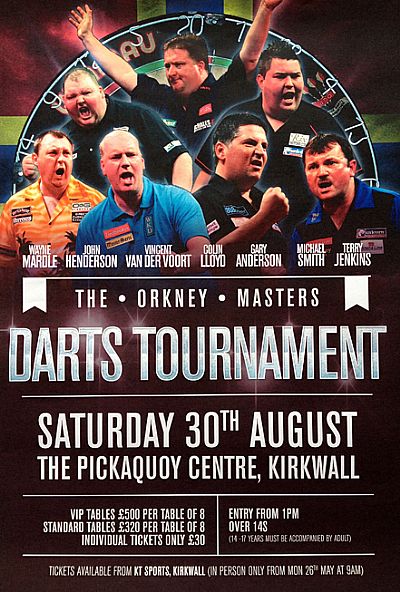 Further details have been finalised for The Orkney Masters Darts Tournament which is set to take place at the Pickaquoy Centre on Saturday, August 30.
The masters will see seven of the top names in darts travel to Orkney to take on local players, who have the opportunity to qualify to play the pros on the big stage.
The visiting professionals are Gary Anderson, Colin Lloyd, Terry Jenkins, Wayne Mardle, John Henderson and Michael Smith.
The event is being organised by Gordon Morrison from Inverness, which the qualifiers run by the committee of the Kirkwall and District Darts League.
The qualifiers start on Friday, May 30, in the Kirkwall Legion Club, then: Friday, June 20, in the Royal Hotel, Stromness; June 27, in the Kirkwall Masonic Club; and on Friday, July 4, also in the Masonic Club.
The top two players in each will qualify but, in the last qualifier, the two beaten semi-finalists will play off for the ninth spot and he, or she, will play with the pros.
It's open to any player, male or female, and all names should be in by 7.30 p.m. The entry fee for these events is £5 per player.
Tickets go on sale on Monday, May 26, at 9am, from KT Sports in Kirkwall. It should be noted that tickets are ONLY on sale from that time, in person from the shop. No telephone bookings accepted. Tickets must be paid for on the day.
VIP tables, which seat 8 are priced at £500, standard tables are £320 per table of 8, and individual tickets are priced at £30.