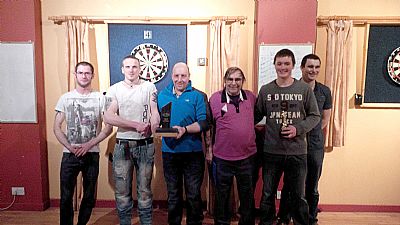 A good turnout of 38 players came forward for the Orkney Aggregates Under 30 Trophy — fewer than last year but only by three.
Quite a lot of west mainland players took part and they more-or-less dominated the contest with the title holder Erland Ritch going great guns as he reached the final without dropping a leg.
In the other half, Colin Sinclair was also playing well as he reached the final.
But he had no answer to Erland’s play and went down 4-0 as Erland retained his crown without dropping a leg.
In the Williamsons ‘A’ League, the Legion chalked up win number 80 with a 8-4 win over the Sanday boys.
Still in second spot are the Golf Club with a 10-2 defeat of RBLM — but they are six points behind.
The Commodores are still in third even after their game with Shapinsay was called off, and the Untouchables failed to take advantage as they went down 7-5 to Quoyburray ‘B’.
The other Quoyburray team did not fare so well, going down 8-4 to the Untouchables ‘A’.
There was a good 9-3 win for the Wanderers out at the Murray Arms.
The Nomads are back on top of the Williamsons ‘B’ League with two good wins — a big 11-1 defeat of Deerness and 9-3 out at the Sands, who also went down 8-4 to the Bilco Boys who then went down 8-4 to St Ola.
The Ola then lost out to the Motorhoose 7-5.
The Shore had a good 8-4 win over Meadowbank. There was no score in from the other two games.
There were 180s from Trevor Shearer, Colin Ross, Martin Peace, Graham Reid, Ian Wilkie, Ben Hogan, Colin Kirkpatrick, Robert Gatt, Keith Brumpton, Raymie Rendall, Stewart Patterson, Michael Moodie, Archie Yule, John Thomson, Michael Vendy, Billy Brown, Edrian Skea.
There were two from Liam Drever, Stevie Linklater and Kevin Gray.
High checkouts included 100 from Mike Bain, 106 Mathew Wylie, 108 Billy Brown, 109 Andrew Moar, 110 Roy Griffiths, 113 Gordon Rendall, 114 Kevin Gray, 116 Graham Reid, 119 A Edwardson, 129 Derek Ward Jnr and 145 Neil Croy.
It’s the ‘B’ boys’ big night on Fridaynight with the ‘B’ League Singles taking place in the Masonic. Names by 7.30 p.m.
Then it’s back to the ranking points with the League Singles and Doubles before the big one — the Kirkwall Open on Saturday, March 8.