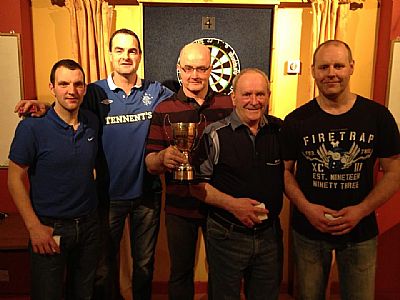 Nine teams entered for the first cup of the new year — the Swanney Cup.
Eight ‘A’ teams and only one ‘B’ team, the ever faithful Nomads, and they took the strong Sanday team to the play-off game, but lost out 3-2.
The top game saw the two top teams in the Williamsons ‘A’ League clash, with the Legion beating the Golf Club 3-0.
The Legion went on to beat Sanday 3-2 to make the final with the Wanderers waning, following wins over the Commodores (3-2) and Untouchables ‘A’ (3-0).
In a very good final, the Legion won the play-off game to win 3-2.

There were 180s from Stevie Linklater and Brian Moar. Aaron Mitchell had a 102 checkout.
Both leagues get under way next Monday, with Legion teams leading both. The Legion in the ‘A’ and the Nomads in the ‘B’.


The next big event is the E. R. & T. Craigie Singles Cup, in the Quoyburray on Friday, January 24. Names by 7.30 p.m.
It’s also a ranking points event and, with so little points separating lots of players, a big turnout is expected.


Next committee meeting is on Wednesday, January 22, in the Masonic at 8 p.m.


The Kirkwall Open this year is set for Saturday, March 8, in the Masonic, it will be sponsored by Tennent’s and J.W. Gray & Co. Thanks to them for their support. There will be over £1000 in prize money up for grabs on the day, with the winner taking away £500.

Already, there’s interest from Caithness and Shetland and, remember, the trophy has never left Orkney, as all the winners have been members of the K-DDL. Let’s try to keep it that way!