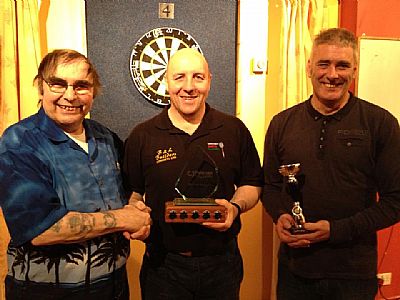 Another great night of darts, as 68 players entered for the festive open singles — the second highest entry.
It was great to see ten West Mainland players enter, though Robbie Brass was the only one to reach the last 16. The rest were well-known players, and included Simon Parry, the captain of the Westray parish team.
But Simon beat some very good players, including Kevin Gray, as he made the final.
Waiting there was Stevie Linklater, making his third ranking final on the trot, and he became the first player to win three on the trot, with a 4-1 defeat of Simon.
So, after four ranking events, the table reads as top: Stevie Linklater on 41 points; Ivan Leslie 31; Kevin Gray 19; Leigh Shearer 13; Brian Moar 13; Alan Gray 13; Derek Firth 11; Bruce Moar 10; Jimmy Miller 10; Roy Foubister 10; Gary Wilson 10. Another 27 players have points ranging from nine to three.
The next ranking points event is the E. R. & T. Craigie Trophy, on Friday, January 24, 2014, in Quoyburray.

In the Williamsons ‘A’ League, all the games except one have been played, and the Legion hold a three-point lead, after beating Quoyburray 11-1 for their 78th win since their last league defeat.
The Golf Club, in second spot, went one better by whitewashing the Murray Arms 12-0. The Commodores in third,were 8-3 winners over RBLM. The Untouchables, are in fourth, with a 7-5 win over the Wanderers.
Still no luck for Shapinsay, after going down 9-3 to the Untouchables ‘A’, and a good 8-4 win for Sanday — 8-4 over Quoyburray ‘B’.

All three top teams in the Williamsons ‘B’ League dropped points, as all three drew their games: St Ola held the Nomads to a six-all draw, as did the Shore against the Sands ‘2’. But the Shore did better in a postponed game, beating Deerness 8-4.
A mixed week for Tankerness, as they went down 7-5 to the Motorhoose, but beat the Sands 7-5.
Deerness didn’t fair any better in their second game, losing 8-4 to Meadowbank.
The Legion Arrows are right up there, after a good 8-4 defeat of the Likely Lads. No score from the Bilco Boys-Motorhoose game.
There’s a couple of games still to be played in the ‘B’ League.

There were 180s from Brian Moar, Michael Muir Jnr, Freddie Tait, Neil Drever, Cammy Scott, Colin Findlay, Erlend Eunson, Billy Brown, Raymie Rendall, and two from Paddy Kirkpatrick, Ross Donaldson, Kevin Gray, Ivan Leslie and Robbie Stanger, three from Keith Bain and Davy Henderson and six from Stevie Linklater.
That brings the total for the first half to 269, compared to 274 in last year’s first half. Top of the table is Kevin Gray, on 26. Next is Stevie Linklater on 19; then Ivan Leslie on 14; followed by Ian Wilkie and Robbie Stanger on 13.
High checkouts: 100 from Derek Firth and Paddy Kirkpatrick, who also had a 130. 103 Keith Bain; 104 Grant Harrold; 106 Jimmy Miller; 108 and 110 Raymie Rendall; 111 Ivan Leslie; 118 Liam Drever; 119 Des Gillespie; 124 and 136 Neil Croy; and 125 Michael Muir Snr.
Top of the Williamsons ‘A’ League checkouts, on 156 were Leigh Shearer, Keith Bain and Alan Gray.
Top ‘B’ League checkout was 157, from Bill Robertson.
Winners of the raffle: Liam Doull, Shetland; second prize: Scott Spence.
Thanks to everyone who bought or sold tickets.
I would like to wish all players a very merry Christmas and a happy new year - Tattie Bogle.