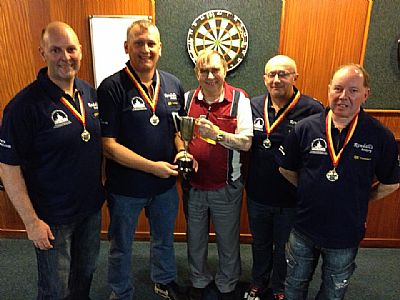 Not too bad a turnout for the Spiers Cup — the first of the ‘A’ and ‘B’ cups. Thirteen teams (nine ‘A’ and four ‘B’) made up the number.
It was a bit disappointing to have only four ‘B’ teams, but one of them shocked some of the bigger teams.
That was the Sands ‘2’, who got to the semi-finals with a great win over the Commodores, before bowing out to Sanday.
The holders, the Legion, found the going hard, coming from 3-0 down against the Murray Arms to win 4-3, but going out to Sanday by the same score.
The Golf Club had been playing steady darts all night and made the final by beating the Untouchables in the semi-final, and proved too strong for Sanday, winning 4-2 in the final.
That is all the domestic cups for just now. The next one is the Louttit Singles, the first of the ranking points games.
But, before that, the K-DDL welcomes Caithness, on Saturday, October 5, in the Masonic Club, for an ‘A’ and ‘B’ team competition. Players are requested to be at the club by noon.
The leagues are now under way.
Will the Legion remain undefeated and go on to break the longstanding record of 72 games held by the Nomads? The Legion are on 67.
If they do, Jimmy Miller will have been in both teams for both records.
The Sands team have registered four players, so will be playing in the ‘B’ league.
There were 180s in the Spiers Cup from Michael Moodie, Jamie Drever, Billy Ward and Alan Gray, and a high-checkout of 102 from Michael Muir Snr.
The next committee meeting is on Wednesday, October 9, in the Masonic Club at 8 p.m.