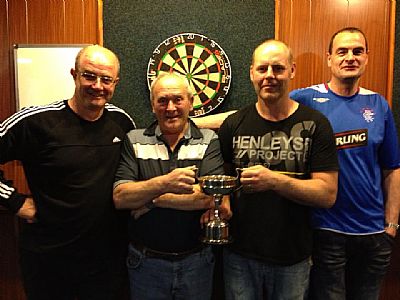 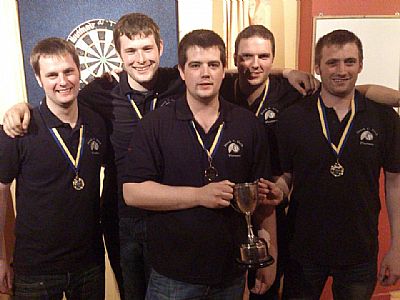 The standard of darts so early was amazing.
The Allied Hotels Cup, for ‘A’ teams, attracted only nine teams and, with two teams doubling up, only seven teams were represented.
But what a feast of darts it was, with the very first throw getting a 180.
There were some great close games early on, with some games going to the play-off stage.
The Untouchables, the defending champions, made it to the final and waiting for them was the Legion, who proved too strong, and ran out 3-0 winners.
Four 180s were scored, with new boy Ben Hogan getting the first with his first throw! Other 180s came from Michael Bain, Derek Firth and Ivan Leslie in a 13 darts leg. There was also six other legs in 15 darts.
High checkouts: 116 Michael Bain; and 124 from Derek Farmer and Ivan Leslie.
Nine ‘B’ teams came forward for the St Ola Cup.
All the games were closely contested and, at the end, the Shore took on the Nomads in the final, with the Legion based boys winning 3-1.
It is the Nomads’ first cup, but I don’t think it will be their last.
No 180s or high checkouts were scored.
That’s all the cup games for now; the next cup is the one against Caithness on Saturday, October 5, in the Masonic Club, with a 12.30 p.m. start.
The Kirkwall teams are: ‘A’ team: captain — Craig Taylor, Kevin Gray, Ivan Leslie, Neil Croy, Derek Firth, Robbie Stanger, Billy Ward, Michael Bain, Ian Wilkie, Brian Moar, Alan Gray, Stevie Linklater, Roy Foubister. Reserves: Jim Brown, Trevor Shearer, Martin Peace and Leigh Shearer. ‘B’ team: captain — Alan Brown, Paul Firth, Brett Dickenson, Craig Moar, Ryan Tulloch, Michael Montgomery, Jamie Drever, Brian Stevenson, Ramie Rendall, Gary Wilson, Graham Louttit, George Low and Derek Manson. Reserves: Billy Brown, Roy Griffiths and Erlend Eunson.
There is also a ladies game.
Players unable to play should let team captains know.
Players are requested to be at the Masonic by noon at the latest.
It is on with the league games now, on Monday.
The Sands have until noon on Sunday to declare a team, or they will be removed from the league fixtures.
At present, they only have two registered players and four are needed.
Festive raffle tickets are now on sale from all team captains and committee members.
League entry fees are now due. Pay to the treasurer or the secretary.