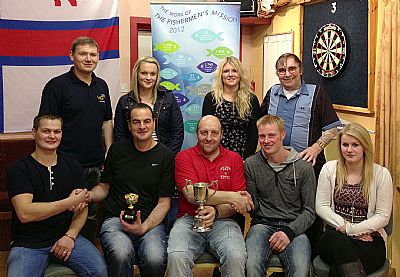 A very disappointing turnout for the Davy Cooper Memorial Charity Singles.
Only 38 came forward, which was well down on last year.
I think the Parish Cup Games were to blame; I’m sure the organisers could have avoided a clash.
Lots of the top players were missing, but it didn’t distract from some great darts, and with it being the best of three legs, there were some surprise results.
The three ladies who entered all went out at the first hurdle, but they did alright in the raffle.
The games were very much like the week before, with the same two players advancing to the final — Stevie Linklater and Ivan Leslie.
And it looked as if Ivan was going to keep his title, as he raced into a 2-0 lead, just needing one more.
But, just as he did the week before, Stevie took the next three for a great 3-2 victory.

In the Williamsons ‘A’ League, the Legion just keep rolling along, as they eased past the Nomads’ record with win number 73.
On the receiving end of a 10-2 score line was the Murray Arms.
The Legion can’t make the ton this season, but could get up to 89.
The Commodores have emerged as one of the serious challengers, after seeing off the Wanderers 10-2.
Also up there is the Golf Club, after a 8-4 defeat of Shapinsay.
The two Untouchables teams clashed, with the Untouchables beating the ‘A’ team 7-5.
There were also good wins for RBLM, against Quoyburray ‘B’, 8-4 was the score, and it was worse for the other Quoyburray team, who went down 10-2 to Sanday.
In the Williamsons ‘B’ League, the Nomads are the only team with full points, as they played two games.
The first was the big one against the Legion Arrows, which they won 7-5. Then, they took the points, with a 9-3 beating of Meadowbank.
The Arrows had a good result, holding the strong St Ola team to a six-all draw.
The Sands ‘2’ are also going strong, taking out Tankerness to the tune of 11-1, and there was a first win for the Likely Lads. The Bilco Boys went down 10-2 to them. There were valuable points for the Motorhoose.
7-5 over the Shore and also good points for Deerness, who beat the Sands 7-5.

The next big game is the Jim Scollie Masters, on Friday, November 22. It is a singles ranking event and, at the moment, lots of the top players are in need of points.

It is coming time now for getting the festive raffle tickets back to the treasurer, sold or not. But sold would be best!
The next committee meeting is on Wednesday, November 20, in the Masonic Club, at 8 p.m.