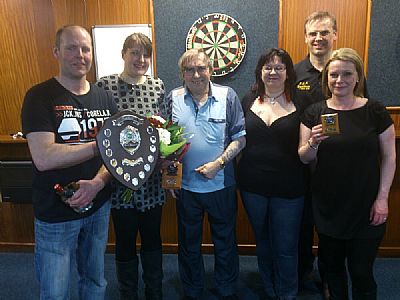 The Steven Flett Memorial Charity Shield had a good turnout of 23 pairs — well up on last year — and produced some very good games.
Both semi-finals were top class affairs, with the holders, Kevin and Shona Gray, coming good, winning 3-1.
In the other semi, the new pairing of Robbie Stanger and Catherine Clyde also won 3-1.
What a final it was too, with top darts and great finishing, except for the first leg where Kevin and Shona somehow managed to lose it.
But they made no mistakes by taking the next two.
But back came Robbie and Cath to take it to a deciding leg, and it could have gone any way, but a missed dart at the bull by Cath allowed Kevin in to retain their title 3-2.
It’s the third on the trot for Kevin and Shona, and £115 was raised for the Talking Newspaper, this year’s chosen charity, and will be added to the Tattie Bogle Shield takings later in the year.

Both the Williamson’s Leagues are now completed, except for a couple of ‘B’ games, and they will be discarded, as they don’t affect any league places.
In the Williamson’s ‘A’ League, the Legion remained undefeated, after beating Sanday 10-2. It was their 67th win since their last defeat — 8-4 to the Untouchables — three years ago.
At the other end of the league, the wooden spoon was decided, and it goes to Meadowbank as they went down 7-5 to Quoyburray, and end with no wins and only two draws.
The Golf Club finished strong, with an 8-4 win over RBLM, who did well to finish on 20 points in their first season in the top flight.
The Wanderers settled for a draw with Quoyburray ‘B’, after both teams couldn’t muster enough players, and the battle of the Untouchables ended with the ‘A’ team winning 8-4, meaning the Untouchables finished in their lowest ever position, in fourth bottom, but well clear, in points, of the relegation places.
In the Williamson’s ‘B’ League, the wooden spoon has gone to the Sands ‘2’, as they lost out 10-2 to the Legion Arrows.
Hopefully, someone knows where the ‘B’ wooden spoon is. Let Jim Scollie know.
Elsewhere, there were good wins for the Murray Arms — 7-5 over the Nomads, who also went down 8-4 to the Sands, who are in third spot.
Deerness got a good point in a six-all draw with Shore ‘2’. The other Shore team lost out 8-4 to the Sands.

Most high checkouts: Kevin Gray, on 18, for the ‘A’, and Allan Brown with six for the ‘B’ League.
Up next, it’s the big one — the visit of Shetland, on Friday, April 26, in the Masonic Club. Come along and support the local boys, as they try to make it three in a row.
Then, it’s the Anniversary Shield in the Legion on Saturday, April 27. Names by 1 p.m., male and female.