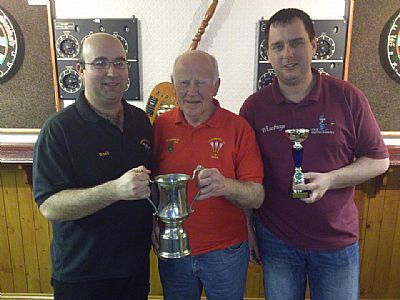 Thirty-nine players came forward for the E. R. & T. Craigie Singles, a ranking points event.
With such a strong field, some big names fell early on, including the top ranked player, Kevin Gray.
But, by semi-final time, it was familiar faces, with Brian Moar beating Bruce Moar 3-2, and in the other semi, Michael Bain took out Stevie Linklater 3-0.
But Michael couldn’t take the title, going down to Brian, but only 4-3.
It was welcome points for both players.

In the Williamson’s ‘A’ League, the Legion have moved seven points ahead, after defeating the Quoyburray ‘B’ 9-3 — their 58th straight league win.
The reason they increased their lead is because the Golf Club were drawing six-all with the Commodores, and that allowed the Wanderers to move closer to the teams above after a close 7-5 win over RBLM. They are now only two points off third spot.
Poor old Meadowbank have still to collect a point after going down 8-4 to Untouchables ‘A’.
Still in with a chance are Sanday, after beating the Quoyburray 8-4, but they are eight points off second spot, and that’s a lot to catch up.
Shapinsay continue to dominate the Williamson’s ‘B’ League after beating the Bilco Boys 11-1.
Things are not very clear in the ‘B’ League, as too many score cards are not being handed in on time, which is noon on Saturday. No card means no score and no points!
All the other games ended in six-all draws, so no dramatic change in league positions.

The singles in the Auld Motor Hoose didn’t attract a big entry, but they are going to try again on Thursday, February 14. Names by 8.30 p.m. It’s money in, money out, and it’s open.