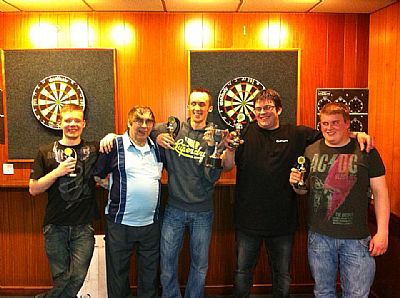 A good turnout for the ‘B’ League Doubles, as 18 pairs entered — well up on last year.
Some splendid darts was played, no more so than in the semi-finals, as both went the full distance, with one pair coming from 2-0 down to win 3-2. That was Keith Bain and Derek Ward Jnr, over Paddy Highley and Cammy Scott.
In the other semi, Adrian Skea and Billy Brown overcame the strong pairing of George Low and Robbie Norquoy, also 3-2.
In the final, Adrian and Billy took a 2-1 lead and looked likely winners, but some great finishing by both the ’Hope boys saw them win the next three games to win 4-2, and take the cup back over the barriers.

It is on to the last cup of the first half of the season, the very popular Festive Open Singles, in the Masonic, on Friday, December 14.
It is an open contest, but, as it’s a ranking points event, it’s only open to male players, and only registered players get ranking points. Cash prizes are on offer, as it’s money-in-money-out.
In the Williamson’s ‘A’ League, Legion are homing in on the record undefeated run, as they equalled the second-highest, by winning their 55th game in a row with a 10-2 defeat of the Untouchables, whose record they have equalled. A bit to go yet to catch the old Nomads record of 72 wins!

Both the Golf Club and Commodore are lying in equal second spot after wins over the Sanday team and Quoyburray ‘B’ by 9-3 and 7-5 respectively. It was Sanday’s third loss on the trot.
Still with no points are Quoyburray, who went down 11-1 to Untouchables ‘A’, and Meadowbank, with no points, lost out only 7-5 to the Wanderers.

There was no score in from the top match in the Williamson’s ‘B’ League. League leaders Shapinsay were due to play second-placed Murray Arms.
As a result, Tankerness moved into second spot, after beating the Sands 8-4.
Also doing well are the Likely Lads, 9-3 winners over the Bilco Boys, and another win for the Nomads, beating Deerness 7-5.
Top score went to the Sands, with their 10-2 over Legion Arrows.
Down at the Shore, both teams met, with Shore ‘2’ coming out the better by a score of 9-3.

High checkouts: 102 Michael Kemp; 105 twice from Stevie Linklater, along with a 116; 110 Arthur Cruickshanks; 120 Michael Vendy; 130 Robert Gatt and James Flett; with Kevin Gray 138.
With the festive raffle taking place the same night as the festive singles, it’s time to get the counterfoils and monies back to the treasurer at the Bank of Scotland, or the secretary, Jim Scollie, now. Don’t leave it to the last day, as then it’s too late to sell any unsold tickets, so get them in please!