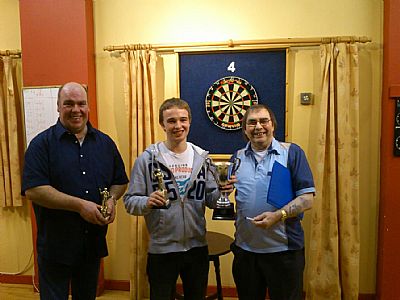 Another great entry of 33 players came forward for the ‘B’ League Singles. That is 50 per cent of the registered players.
Even so, there were some big names missing, and of the ones present, some went out early on.
But, by semi-final time, there was a good mix, with two from Shapinsay, one from the Sands, and one from the Nomads, with the Sands player, Jamie Drever, and Shapinsay’s Billy Eunson making the final.
And what an advert for the ‘B’ boys, as the final looked like going to Shapinsay, as Billy stormed into a 3-1 lead, only needing one more game.
But he never got it, as Jamie stormed back to take the next three games for a dramatic 4-3 win; the second year on the trot a player has come back from 3-1 down to win!

This Friday, it’s back to both league players, with the league doubles in the Masonic. It’s also a ranking points event.
I think the top five in the table are quite safe, but under that, a lot of players could find their way into the team to play Shetland on April 26.
So a big entry is expected. Names by 7.30 p.m.

In the Williamson’s ‘A’ League, the Legion are not far away from retaining their title, after a 10-2 thumping of the Commodores, one of their main challengers. It was their 60th game undefeated!
The Golf Club are now clear in second spot after beating the Wanderers 9-3, and what a win for Quoyburray ‘B’, last year’s wooden spoonists, as they inflicted an 11-1 defeat on Untouchables ‘A’.
The other Untouchables had a good 7-5 win over Sanday, and there was also a good 9-3 win for RBLM over Quoyburray.

Shapinsay still lead the Williamson’s ‘B’ League, even though their game was postponed.
The Sands lost ground, after going down 9-3 to the Murray Arms, who could be the main challengers to Shapinsay.
The Likely Lads had to settle for a six-all draw at the Shore, who also drew their postponed game with the Sands ‘2’, who also drew with Deerness.
There was a defeat for Tankerness, going down 7-5 to the Legion Arrows, but joy for the Nomads, after beating Bilco Boys 7-5.

The Auld Motor Hoose will be holding an open singles event on Thursday, February 14 (Valentine’s Night!).
It’s a money-in-money-out contest. Names to be in by 8.30 p.m.