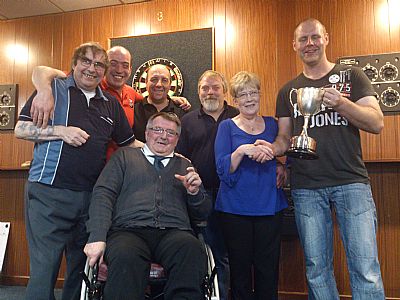 It was a week of surprises in both Williamsons’ darts leagues, with two of the undefeated teams biting the dust in the ‘A’ league, and one in the ‘B’ league.
In the top league, the Wanderers went down 9-3 to the Golf Club, and they remain undefeated but have had a draw.
And what a result for Sanday, with a 7-5 win over last year’s runners-up, the Untouchables.
And what about Quoyburray ‘B’, last year’s wooden spoonists — a great 8-4 defeat of Untouchables ‘A’, which gives them six points — two more than they totalled all of last season!
The champions of last year, the Legion, recorded their 49th game without defeat, with a 10-2 win over the Commodores.
They now equal the total of third-placed Likely Lads, who went to that total in the 1980s.
RBLM got their first points of the season, with an 8-4 win out in Quoyburray.

What a result in the Williamsons ‘B’ League, as the league-leaders, Murray Arms, crashed to the first whitewash of the season — 12-0 to the Sands — a result which allowed Shapinsay to go clear at the top, after their 10-2 win over Shore ‘2’,  and leaves Shore ‘2’ second-bottom on one point.
There were first wins for Deerness (8-4 over Sands ‘2’) and for the Bilco Boys (a good 7-5 over the Nomads, who, after a good start, have faltered a little, but it’s early days yet).
One score from the ‘B’ league is still missing — Shore ‘2’ v Sands. Remember, no card, no points.

It was another big week for 180s, with 28 being scored — 16 of them in the Louttit Singles.
There was one each for Cammy Scott, Ryan Tulloch, K. Wilson, Trevor Shearer, Derek Farmer, Neil Tait, Robbie Stanger, Derek Firth, Stevie Linklater, Graham Louttit and Ian Wilkie; two from Bruce Moar, Gordon Rendall, and Davy Henderson; three for Ivan Leslie; and four each from Brian Moar and Kevin Gray. Leigh Shearer had a 177 score.

High checkouts: 100 from Glen Miller, Leonard Craigie, Sinclair Craigie and Stevie Linklater, who also had a 110; Neil Tait 103; Paddy 106; Robert Gatt 116; and 117 from Keith Brumpton.
The league games now take a break for a week, with all the cricket trophies being played for next week — ‘A’ teams on Monday in the Legion, and ‘B’ teams in the Masonic on Tuesday. Then, on Friday, it’s the cricket singles and doubles in the Legion, all with a 7.30pm deadline.

A good turn out of 42 players entered the Louttit Singles, the first ranking-points event.
It was one better than last year and it included 11 ‘B’ players, but only two got into the points — George Low and Paul Firth, which was more than his father Derek, the defending champion, as he went out in the first round, along with a lot more top players.

By the semi-final stage it was three very familiar faces, and one who has improved a lot lately — Trevor Shearer — but he couldn’t stop Kevin Gray, and went down 3-0.
That was the same score when Stevie Linklater beat Ivan Leslie.

The final was very good for the first six legs, as both players shared them on their own throw. The final leg was a bit nervy, with both players missing doubles, but Kevin did get it to win 4-3.
Billy Louttit was on hand to present the trophy.In the final, Kevin averaged 78.14 and Stevie 76.06, so good in any competition.
Committee meeting on Wednesday, October 24, in Masonic, at 8pm.