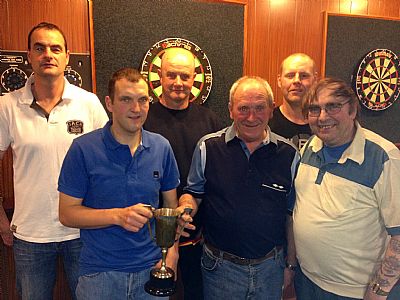 Another great night of darts, as 68 players, makin up 15 teams, came forward for the Spiers Cup, the first of the ‘A’ and ‘B’ cups.
Ten ‘A’ teams and five ‘B’ teams made it the biggest team cup since the 1970s, when there was only one league and every team entered.

There were some great games in the first round, with the ‘B’ boys putting up stiff resistance and surprising the big ‘A’ boys.
Two ‘B’ teams made it to the finals where they both fell, and by the semi-final sage it was the Legion, Untouchables, Wanderers and Golf Club making up the last four.
It was the Legion and Wanderers who went on to the final, where the Legion won very easily 4 - 0 to retain the cup from last season.

There were 180s from Ivan Leslie and Sean Stanger, and high outs of 101 from Leigh Shearer and 125 from Derek Firth.
There is a short break now from cup games as the leagues get under way.

The next cup is the Louttit Singles, the first of the ranking events. It is for registered players only, and is in the Legion on Friday, October 12 – names in by 7.30pm.
Some changes in the fixture list, with the annual East v West now being played in the new year instead of December. It is pencilled in for March 29, 2013, in Stromness.

Also, this year’s Orkney Championships play-off, cancelled earlier, will now be played on Friday, November 16, with this season’s one by April 30 next year more nearer the time.

Team entry fees are now due and can be paid to the treasurer or secretary any time before the end of October.

The Davy Cooper Charity Singles will be played early November, and the League will be holding a bottle stall raffle.

It is hoped that all League teams will supply a bottle for this event, or any prize will do. All donations to the secretary welcome.