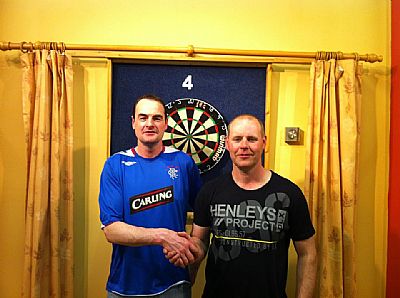 Forty of Orkney’s top players came in for the first of the qualifying games to find eight players to play the top boys in September.
Twenty-seven K-DDL players and 13 outside the K-DDL toed the oche with just the one young lady, Catherine Symonds, but she bowed out at the first hurdle.
With such a star field, some big names also bit the dust early on. By quarter-final time, it was all K-DDL players left.


I understand Paul Foubister is going back to the West Mainland, but he did make the semi-final only to fall to Kevin Gray by three games to one.
Also making the final was Kevin’s team-mate Ivan Leslie, with a 3-2 win over Ian Wilkie.


Both semi-finals were great games but the final was superb and, with both players forward to the big one, it was surprising both players turned on the style.
It was Ivan who came on top 3-2, but well done to both players for an excellent display. As somebody said, “Who needs professionals with players of this calibre up here.”
So, it is on to the second qualifier on Friday, in the Stromness Golf Club. Names by 7.30 p.m.


After that, it is on to the Commodore next Friday for the third qualifying round and, finally, the Legion for the last important qualifying game.
That is it then until the AGM on Thursday, August 16.


Team names must be in by August 12. Registration books now from the secretary.
The Jubilee Singles is in the Legion on Saturday, June 2. Names by 1.30 p.m., and £100 is at stake for the winner. Members only.