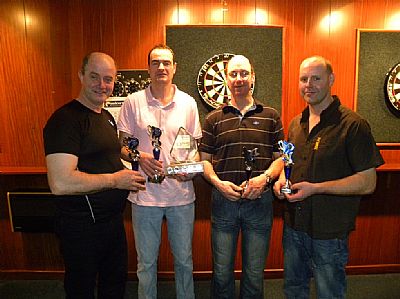 A record entry of 74 players turned up for the last event of the year – the Festive Singles – well up on last year.
It was also a ranking points event, with only registered players getting points.

There were 51 registered and 23 non-registered players, but, before the main event, the KDDL presented two cheques of £300 each to the Fishermen’s Mission and RNLI.
Back to the darts and, as usual, there were some big names going out early, such as Billy Ward, the defending champion, but, even with all the non-registered players in, only two survived going in to the last 16. They were Clive Hewison and Jim Brown, from Westray, who was playing great darts, but went out in the quarter-finals by Kevin Gray, who was joined in the semi-finals by team-mates Ivan Leslie and Derek Firth, along with Ian Linklater.


It was Ivan and Ian who made the final. On the way there, Ivan had 11 and 12-dart legs, and Kevin also had a 12-dart leg.
In the final, Ivan went one leg up, only for Ian to equal. But that was all he got, as Ivan rattled off the next three legs to win 4-1.
But it was far from being one-sided. Only sharper finishing on the doubles won it for Ivan.

The Williamson’s ‘B’ League has finally been completed, with Shapinsay beating the Likely Lads 9-3 and Shore ‘2’ getting the better of the Shore 8-4.
The festive raffle was also held on Friday. The winners of the two main prizes were, first, “Muggins”, and second, Fraser Laird. Another 15 prizes were spread all over Orkney.
Thanks to everyone who sold or bought tickets.


Well, that’s it for this year, the committee wish all the players and friends a Very Merry Christmas and A Happy New Year.