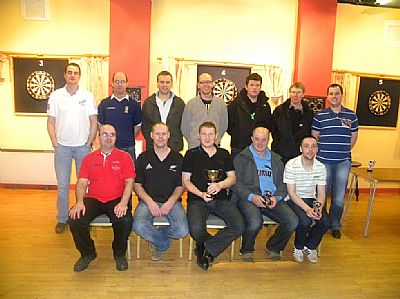 There were mixed fortunes for the East teams in the annual East v West fixtures.
The East ‘B’ boys started off not too bad, as they shared the doubles 2-2, and the first two singles, but only won one more out of the next six and lost out 8-4.
But, the East still lead in the fixture overall, with a score of 10-6.
The only score of note was Neil Croy’s 180 and 112 finish in the same leg.


No problems for the big boys in the main event though, as they quickly raced to the first five games – all by 3-0 scorelines.
They lost one 3-2, but took the next four to lead 9-1 and, only needing two more games, had to wait for the doubles, as the West took the last two singles to trail 9-3.
The doubles ended up three-all, so the East won for the 31st time.
The West have seven wins, but their last win was in 1998-99, and they also won in 1997-98 to make it the only time the West have won back-to-back events.

In the last of the first half Williamson’s ‘A’ League fixtures, the Untouchables closed the gap on the Legion with a narrow 7-5 win over Quoyburray ‘B’, but still trail by five points.
Quoyburray ‘B’ also played their postponed game against the Golf Club but, once again, came up short, losing 5-7.
The other Quoyburray team also had hard luck, going down by 7-5 to the Untouchables ‘A’.
The Wanderers stay in third spot, but only just, after Meadowbank held them to a 6-6 draw, and watch out for the Commodores – they had a very good 8-4 win over Sanday, who have faded away after a good start.


There were 180s from: Gordon Rendall; Michael Muir Jnr; Alan Gray; Brian Stevenson; Michael Montgomery; Willie Bremner; Roy Foubister; Andrew Rendall; David Kirkpatrick; Trevor Shearer; and two from Mike Bain; Robbie Stanger; and Paddy Kirkpatrick.High checkouts of a 103 and 124 from Ian Linklater; 118 Robbie Stanger; and Brian Moar had a 155. Just short of the highest of 158 from Derek Firth. The total number of 180s for first half of the season is 192.

There’s still a couple of ‘B’ games to play and they must be completed by tomorrow, Friday, or the committee will make the decision on the result.


And, of course, it’s a big night on Friday with the Festive Singles and raffle, both in the Legion. Names by 7.30 p.m.
It’s an open event, as well as a ranking points game. Only registered players can score points and if any players have any raffle tickets left, get them in to the Legion by 8 p.m., sold or unsold.
Darts will resume on Monday, January 16, 2012, with the Swanney Cup.