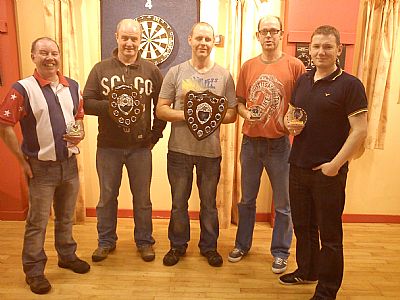 A very poor turnout of only 14 players turned up for the Cricket Singles and Doubles competition. At one time this used to attract more than 40 players.
However, although it was not a big entry, the standard of darts played was top notch in both events.
In the doubles, the Legion pairing of Derek Firth and Kevin Gray were showing great form with big scoring and lots of bulls (which count as wickets) and they stormed into the final. Their opponents were the Untouchables’ defending champs, Ian Wilkie and Craig Taylor – but even they could not match the high scoring of Derek and Kevin as they ran out 3-0 winners.
In the singles, Kevin Gray kept up the high class darts and made the final to meet Keith Brumpton who had also played well. However he could not match Kevin and went down 3-0.
Two players hit the magic three bulls – that’s six wickets in cricketing terms. t was Ross Donaldson and Robbie Stanger who did the damage, and Ian Wilkie hit a 180 which counts as 140 runs.
There were nearly shocks in both the Williamson’s-sponsored darts leagues with the ‘A’ leaders, the Legion, only just making it 7-5 at the Commodore. However, they do remain undefeated as do the Untouchables after beating Quoyburray 9-3. The top two meet next week.
Elsewhere the Wanderers beat Wanderers ‘B’ 10-2. Once again Wanderers ‘B’ only had three players. Other teams should take note as the other two games were postponed as they couldn’t get four players together.
In the Williamson’s ‘B’ League, RBLM, the leaders, had to settle for a 7-5 win over Shore 2 who suffered their first defeat. There’s now a five point gap to second placed Shore 2.
The Sands had a win and a loss as they went down 8-4 to Shapinsay in a postponed game, but they won 7-5 against Tankerness.
There was a very good 9-3 win for Deerness up at the Golf Club against the Bilco Boys.
The other two games were also postponed. Too many games are being postponed. Teams with six players registered should easily get four to play.
There were 180s from Michael Kemp, James Flett, Kevin Gray, Sean Stanger, Colin Ross, Davy Henderson and three from Ian Wilkie.
High checkouts included 107 from Derek Firth, 126 from Mike Bain, and 127 Billy Bruce but Neil Croy had a 177 and Aaron Mitchell 162.
It’s back to ranking points on Friday night with the Pit Stop singles in the Golf Club. Names by 7.30 p.m.
It’s an open event so any male player can take part but only registered players will get points.
Then, next week it’s the big one with the Davy Cooper Open Singles being played on Saturday, November 12, in the Masonic Club. Names must be in by 2.30 p.m. for a 3 p.m. start. It’s open to all players – male or female. All funds raised to to the RNLI and Fishermen's Mission.
All festive raffle tickets are to be returned to the treasurer by November 30 sold or unsold.