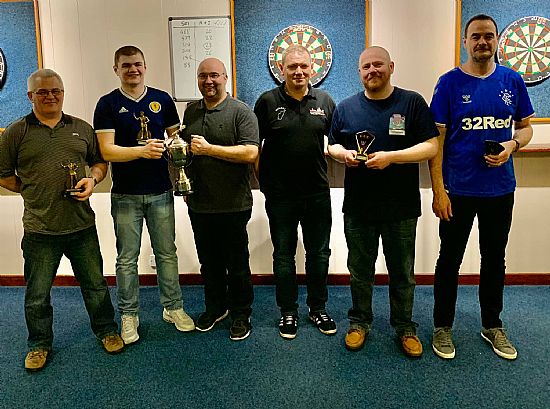 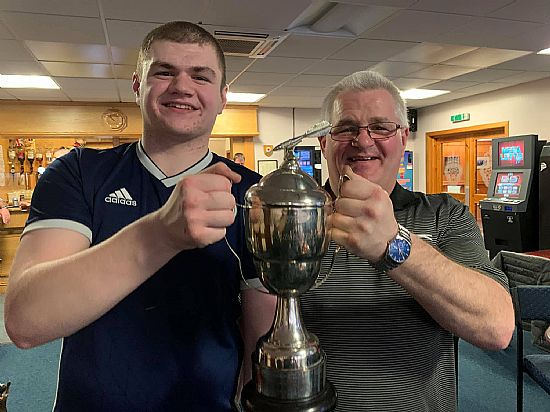 First played for in season 1967/68, this season's KDDL league doubles competition attracted 20 pairs to the Legion last Friday night.
Although no longer a ranking points competition, the prestige attached to the trophy saw a multitude of strong pairings all vying to be the next names engraved on it.
The first of the semi-finals was an all family affair, with brothers Brian and Stevie Moar taking on the father-son pairing of Ian and Alan Findlay. The first few legs were pretty equal but young Alan turned up his scoring power and it proved too much for the Moars, with the Findlays winning 4-2.
The second semi pitched last years champions Paul Foubister and Ivan Leslie against 8-times winners Kevin Gray and Derek Firth. By all accounts it was a good game, with Paul and Ivan deservedly winning through 4-1.
The final was very much a game of two halves.
A blistering start by Paul and Ivan saw them rush into a 3-0 lead, although Ian had missed a dart or two to reduce that lead.
Missed doubles by Paul and Ivan allowed the Findlays to strike back before they extended their lead to 4-1.
It seemed all over by that point, but missed doubles by Paul and Ivan in nearly every leg thereafter allowed the Orphir lads to even the score at 4-4.
The final leg followed a similar pattern, with Paul and Ivan streaking ahead but failing to finish off, while Alan checked out 88 to lift the trophy his grandfather, also Alan Findlay, had first lifted exactly 50 years previously.
Another good advert for the local game, and great to see that taking away the ranking points has not had a detrimental effect on the competition.
Tomorrow (Friday) it is the big one for the 'B' league boys with the 'B' league singles taking place in the Masonic.
With competition extremely tight for places in the 'B' county ranking system, a good run in the cup could all but cement a few folk's places, with only the main League singles still to count towards it afterwards.
Then, next Saturday, March 7, it is the big one, the 2020 JW Gray & Co Tennent's Kirkwall Open Singles, held in the Kirkwall Masonic, names by 1.30pm.
Thanks to the continued generous support of our sponsors, there will be well over £1000 of prizemoney, including £500 for the winner. Find out of Saturday who will be the 12th name on the prestigious trophy. There are also various other prizes including for furthest progressing B league player and lady player.
Donations for the bottle stall/raffle are also very gratefully received.
180s were scored by: Keith Brumpton, Kevin Peace, Bruce Moar, Gordy Rendall, Stevie Linklater, Paul Foubister, Ivan Leslie, Alan Findlay, Robbie Stanger, Colin Kirkpatrick, Brian Murray, Nicol Gray, Robbie Norquoy, Pattie Sinclair, Jamie Marwick, Ian Linklater, Ben Hogan, Paul Firth, Brian Moar, Kevin Sarling (two), Stevie Moar (two) and Stevie Garner (two).
There were three scores of 171 from John Thomson, Don Wilson and Neil Drever, with Stevie Linklater also posting 174.
Ton-plus checkouts came from: Bruce Moar 100, Erlend Eunson 100, Keith Brumpton 110, Steven Groat 110, Ian Eunson 117, Michael Scollie 118, Ray Butcher 120, Kevin Peace 124, Steven Low 125, Kevin Sarling 126, Aaron Mitchell 130, Derrick Firth 137, Stevie Garner 140, Ivan Leslie (100, 100), Leigh Shearer (103, 121), Brian Moar (109, 120), Stevie Linklater (116, 150) and Ian Linklater (126, 160).