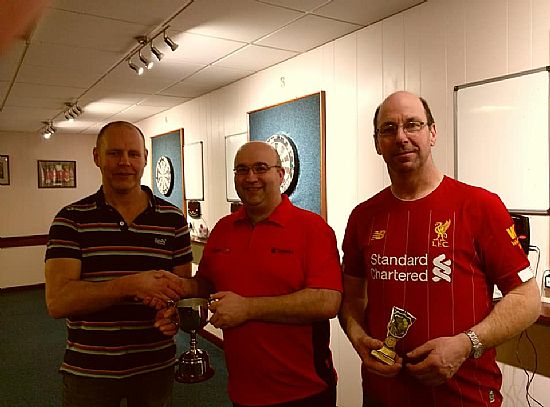 The penultimate ranking points event of this season, the Taylor Singles, took place in the Legion last Friday night, with 38 players taking part.
Now well into the business end of the season, every point gained can be crucial in making the team to take on Shetland, and with that comes a lot of pressure which often manifests in the form of nervy games.
Amongst the nerves however were some determined performances.  Derrick Firth notably pushed Kevin Gray hard early on but just missed out, whilst Brett Dickinson and Stevie Moar both missed darts to beat Wayne Monkman. Wayne showed some serious talent and determination on the night, throwing some spectacular darts on his way to a semi-final showdown with Ian Linklater, who himself was throwing well.
Their match was by far the game of the night but, unfortunately for Wayne, it was Ian who managed to close it out 4-3.
In the other half of the draw Kevin Gray was throwing some stellar arrows, famously refusing a chance for a potential 10-dart leg in his quarter-final win over Stevie Linklater.  Robbie Stanger was quietly picking off his opponents, taking out the other Derek Firth before seeing off an impressive Andrew Green in the quarters. That was as good as it would get for Robbie however, as he failed to meet his earlier form against Kevin and lost out 4-1.
The final was played in front of quite a large crowd, including many of the younger players who had stayed on to see the action.
The first two legs were phenomenal from both players, with Kevin checking out 106 to claim the first before just managing to notch the second.
The beauty of the game of darts is that while high quality darts makes great viewing, lower scoring, missed doubles and a hint of nerves can be even more exciting to watch.  Both players lost their scoring power in the third leg, with Ian taking the leg and, from that point on, the match went with throw, eventually seeing Kevin triumphing 5-3, taking his points tally to 67 and in doing so broke Derek Firth's long-standing ranking points total of 59. Admittedly, less points were on offer when Derek achieved the feat with the league doubles only counting for half points at that time.
Kevin is having the season of his life this year, playing some sublime darts at times, and it is no surprise that he is also streaking away at the top of the 180 and high checkout leaderboards.
This Friday the youngsters (over 18's) of Orkney have their chance to prove they have the potential to be the next big thing in the local game, with the Under 30's open singles taking place in the Legion.
Then the following Friday the prestigious League Doubles take place, also in the Legion.