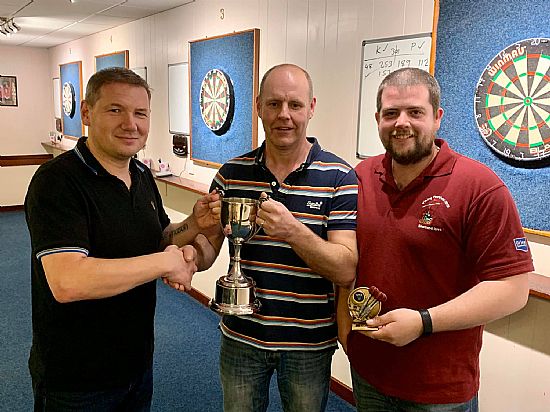 The second week of league darts in the KDDL season has passed and once more the Legion remain top, although they were made to sweat against The Ola.  Joining them on maximum points are the Exiles, who had a good win over the Bilco Boys, with Dennis Watt hitting five maximums.  In the only other Williamsons 'A' League match, the Untouchables threw away a glorious chance to beat the Golf Club, with both teams having to settle for a draw in the end.

All fixtures were played in the 'B' league and still strutting their stuff at the top are the Tigers and Young Loons.  Quoyburray moved third following a close encounter with RBL2, and the Muppets and Tankerness both came out on top against Shandy Bass and Quoyburray 'B' respectively.

21 players entered this years Tom Notman Memorial Cup, a vast improvement in numbers over previous years.  The short 'old league' format of double start 301, best of 3, is always a great leveller and so it proved with a few big guns falling at the first hurdle.

The top half of the draw could have been described as the young half, and two of this seasons up and coming stars met in the semi-final.  Nicol Gray began in earnest, a cheeky double double on eights claiming the first leg, only for Paul Firth to draw even with a bull finish.  Nicol was left to rue missed darts to win, as Paul sneaked through to his first singles final.

Colin Barnett had reached his semi-final showdown with Kevin Gray courtesy of some canny darts, including two big checkouts, but Kevin was in an unforgiving mood, and moved on with a two nil win.

The final was not as one-sided as may have been expected, despite Kevin taking the first leg.  Paul got off the mark straight away in each leg, and took his chance to square things up after Kevin had missed a few darts to win.  Kevin started the last leg like a rocket, and finished it with an explosive 153 checkout, to claim only his second Tom Notman title.